How can you trust ANY of these corporations?

Aren't 'privacy laws' there to protect the data of the plebs/serfs/corporate slaves?

If so then the corporation can be charged under those laws, right?

Let's see if anyone can successfully sue NAB.

We say these are 'money for mates' deals where the corporate slave (read 'customer') has no say whatsoever. 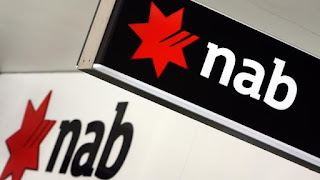 NAB has been accused of “Big Brother” tactics by monitoring when its business customers are shopping around for rival loans, sparking competition concerns.

The lender has been receiving the “tip-offs” from credit reporting agency Veda, which it says are used to “better manage relationships with customers”, Fairfax Media reports.

One borrower who recently applied for a car loan with ANZ said she was shocked to receive an email from NAB saying its “smarter” systems alerted it that she was “seeking or inquiring for finance elsewhere” and it could whip up “multiple quotes”.

“I felt violated,” she told Fairfax. “I felt there was an invasion of my privacy because they accessed information I’ve never given them permission to access.

“I have a right to get second opinions and compare lenders but they put me in a very awkward position.”

In a statement, NAB said it “believes in lending responsibly to our business customers”.

“This means we do use a range of information sources, including limited information from credit bureau Veda, to manage relationships with our customers,” it said.

“This information helps us to understand if our customers are borrowing within their means and operating their businesses prudently.

“We believe it’s important that our bankers keep in touch with their business customers, especially when they are taking out new lending with other institutions, to understand the intent of the finance and how it will impact on their business operations.

“The information received from Veda only relate to business banking customers. No consumer credit information is provided by Veda to NAB.”

A Veda spokeswoman said: “This is a matter between NAB and their customer. Veda cannot comment on NAB and its customers.”

Veda, which collects data on customers’ credit histories, was recently purchased by US giant Equifax for $2.5 billion

Although the sharing of business customers’ data does not technically breach regulations, privacy advocates have described the practice as “sneaky and scary” and said it could raise competition concerns.

Fairfax reports other banks are understood to be using the alert service.

A Westpac spokesman said: “Westpac does not receive alerts if a business customer enquires or applies for a loan at another bank.” CommBank also said it does not use the service.

A spokeswoman for ASIC said neither “privacy concerns” nor “competition issues” were ASIC’s remit and directed inquiries back to the ACCC.