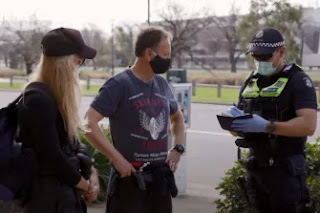 As mentioned before, do not pay any 'COVID' fine whatsoever.

The government of Victoria stands on very thin (legal) legs, something more akin to a chicken rather than a runner or weightlifter.

The mainstream media informed you that the curfew in Victoria was not legally put into action. 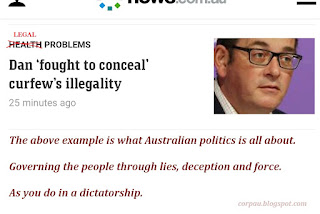 ANY fine as a result of breaking the so called curfew is not legal either.

Don’t pay it, elect to go to court, and seek the necessary legal advice and documentation to have it thrown out.

But be warned the judiciary will not let you off that easy, as no doubt they will STILL try to con you out of your extra hard earned cash (during these ‘virus times’).

Remember what happened in Tasmania?

For over 30 years the magistrates were not sworn in correctly and the 'system' lied to you that all the orders were issued lawfully.

Can you put in a document into court if it’s not sworn in ‘correctly’?

Can you put forward your side of the story, in the dock if you haven’t been sworn in correctly?

If you were affected by an unlawful order in Tasmania, did you seek a remedy from a corrupt system?

Would you be part of a class action lawsuit against the government of Tasmania?

There is a class action against Andrews’ response.