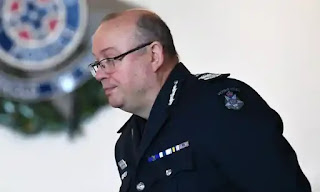 On Wednesday, a spokesperson for Victoria police told Guardian Australia that police “did contact Telstra and request incoming call data for the former chief commissioner’s phone”.

Telstra on Friday, however, disputed the police’s account and denied a formal request was made.

“I can confirm that we did not receive any formal requests for information,” a Telstra spokesperson told Guardian Australia.

A Victoria police spokeswoman said police had “cooperated fully and transparently with the inquiry”.

“As it remains underway it would not be appropriate for us to comment further at this time.”

The phone records are considered crucial in the inquiry’s investigation to determine who made the decision on 27 March to use private security guards in the program.

The inquiry heard the then-Victoria police commissioner, Ashton, knew before the program was announced by the prime minister at 2.15pm that day that security guards would be there to guard returning travellers.

In text messages from Ashton to the Australian Federal Police commissioner, Reece Kershaw, at 1.12pm on the day the program was announced, Ashton said: “Mate. Question. Why wouldn’t AFP Guard people at the Hotel??”

Then four minutes later he texted the head of the Victorian Department of Premier and Cabinet, Chris Eccles, about whether police would be guarding guests.

Ashton alleged at the inquiry he had been unable to remember how he learned private security would be used, and Victoria police has claimed it could not obtain the incoming call records from Telstra under data retention legislation, which might reveal who Ashton had spoken to.

“Victoria police has gone to great lengths to cooperate fully with the inquiry as we understand the critical importance of its work. Victoria police did contact Telstra and request incoming call data for the former chief commissioner’s phone but they advised correctly that under the Telecommunications (Interception and Access) Act 1979 they are unable to provide that data unless it relates to a criminal investigation or missing person investigation,” a spokesperson said.

Under the Act, requests for the data have to be made in writing or electronic form, and signed by an authorised officer. Following inquiries from Guardian Australia on the matter this week, Telstra said no such formal request was made.

It comes after premier Daniel Andrews faced questions over whether the inquiry had enough powers to investigate this information gap. He told Sky News host Peta Credlin at the daily press conference on Friday that the inquiry had not sought more powers to obtain Ashton’s phone records.

When asked whether Andrews and his staff or ministers would be willing to hand over their own phone records, the premier said the inquiry had not sought them.

“At any point where this inquiry has sought more from the government, the answer has been ‘yes’,” he said.

The counsel assisting the inquiry has suggested the decision to use private security guards was not a decision at all, instead a “creeping assumption” by those developing the program throughout the course of the day on 27 March.

A number of final submissions to the inquiry have challenged this theory, pointing to the six-minute gap in Ashton’s evidence.

Lawyers representing Rydges Hotel, one of the two outbreak hotels, told the inquiry the phone records should be obtained.

“Without interrogating the network provider’s records of all incoming and outgoing landline and mobile telephone calls of Mr Ashton, Mr Eccles and those working with them in that short period of time on the afternoon of 27 March 2020, the chair could not possibly conclude there was simply a ‘creeping assumption’.

“Mr Ashton’s contemporaneous text message, which should be preferred to his lack of recollection in the witness box, indicates that the decision in fact came from within DPC. A ‘creeping assumption’ takes time to form – it does not form in six minutes.”

Former health minister Jenny Mikakos said the decision couldn’t be a “creeping assumption” due to the costs involved in the hotel quarantine program.

“This decision had substantial cost and resource implications for the state and it is inherently unlikely, if not implausible, that such a decision would be the result of a ‘creeping assumption’ rather than a considered choice at an elevated level of government,” she said.

“That is also the only cogent explanation for the contemporaneous text messages of Ashton, which described the appointment of private security as a ‘deal set up’ by the Department of Premier and Cabinet.”

Andrews has said he will answer all questions surrounding the inquiry once its report is handed down on 6 November.