You may have heard the sayings;

It seems that Microsoft has mislead its customers that the upgrade to Windows 10 is for free.

In reality Microsoft should be sued, for that action alone.

So, when was the best time to ditch Microsoft Windows?

There is no reason for any person to use the Windows operating system today, as there are plenty of other mature operating systems available which also include the 'Office' suite of programs.

Read the article from 4 Aug 2018 by forbes.com of the headline: 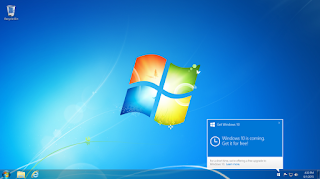 Ever since its creation, Microsoft MSFT +0.11% has described Windows 10 “as a service”. The fear has always been that this meant Microsoft would start charging users a monthly fee to maintain the operating system, and now a new leak has confirmed this is exactly what will happen…

Foley also notes “Microsoft already has a number of the pieces in place to make this happen” such as a Windows Autopilot automatic device provisioning service, device financing programs like Surface Plus and a ‘Surface as a Service’ leasing program. Microsoft also has a subscription bundle including Windows 10 and Office 365 called Microsoft 365 and Windows 10 Enterprise subscription plans.

Furthermore, Foley states “One of my contacts said that Bill Karagounis - former Director of the Windows Insider Program & OS Fundamentals team, who last year joined the Enterprise Mobility and Management part of Windows and Devices - is in charge of the coming Microsoft Managed Desktop.”

With Microsoft also publicly hiring for this new division, managed subscriptions for Windows 10 appear to have the green light.

So what’s the good news? At this time, Foley believes Microsoft Managed Desktop will be targeted at businesses. But the obvious question, given the clear direction Microsoft is moving becomes: for how long?

Foley did ask Microsoft to go on the record about Microsoft Managed Desktop, but the company declined to comment.

All of which means those users who chose to stay on Windows 7 and Windows 8 are probably feeling pretty smug right now. As for everyone who upgraded for ‘free’ to Windows 10, the nagging question must be: will it prove too good to be true?

Posted by AuCorp at 9:17 PM No comments: 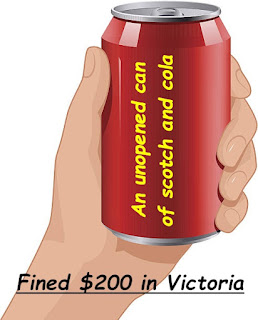 So let's get one basic fundamental out of the way as to what a law is, at state level.

A law is a booklet or collection of papers (or a pdf for the Millennials) that is called an Act.

This 'Act' MUST come out of the state's parliament, with all the checks and balances in place, obviously.

If your person has been 'fined' it must be defined within an Act passed by the parliament of the state you allegedly commented the offence in.

The corporation aggregate called Australian Government is now 'advertising' that there are 3 (three) tiers of government, that being federal, state and now 'local government', where in fact there are only two lawful bodies that can make laws in Australia, that being the federal and state / territory parliaments, where these Acts must be subject to the Commonwealth of Australia Constitution Act 1900 (UK).

To get this message the government 'advertises'  across to the uneducated population, where Victoria Police is part of the fraud, unlawfully issuing fines according to the "Benalla Community Local Law 2017"

What lawfully enacted Act have you been fined under?

Can you really trust a Victorian police officer issuing your person this sort of 'fine'?

It looks like it's the police state in full swing, down in Victoria, Australia.

See text from 1 Aug 2018 by the Benalla Ensign of the headline:

By Simon Ruppert
Have you ever walked home after 11.30pm with some unopened tinnies in your bag?

Bought a bottle of red, popped it in the boot and driven home later, again after 11.30pm?

If you have, and you were in Benalla, then you’ve been breaking the law and could end up with a $200 fine.

On Tuesday, July 17, Jeb Morrison and Lane Williams had been at a friend’s house when, at about 11.45pm, they decided to take a walk home.

Jeb said he would normally phone home for a lift, but did not want to disturb his parents who had work the next day.

‘‘Mum does night-shift and her husband works long hours, generally they pick me up, but it wasn’t that far so we decided to walk,’’ Jeb said.

‘‘We got to the front of VicRoads, about five minutes from home, and I saw a police car come around the corner and the lights started flashing, so we stopped and they pulled us up.’’

What would unfold has shocked Jeb, Lane and their families.

The policewoman noticed that Jeb was holding a sealed can of scotch and cola in his hand and told him it was illegal for him to have it. The can was subsequently confiscated.

Lane would then explain to the officer that he had sealed cans of alcohol in his backpack, he was also told that he was breaking the law, they were also taken from him.

Both men would then be issued separate $200 fines.

Benalla Community Local Law 2017 10.3 states: ‘‘A person must not, without a permit, in any public reserve or in the Benalla Restricted Area have in his/her possession or control any liquor between 11.30pm and 9am in a container with an unbroken seal’’.

A sub-clause then states that this applies to any stationary vehicle in a public reserve or in the Benalla Restricted Area.

The Benalla Restricted area covers most of the town.

You can see the exact boundaries of the Benalla Restricted Area on the BRRC Community Law 2017 document, which is available at www.benalla.vic.gov.au

Jeb, who works full-time and has never had any previous run-ins with police said he could not believe what happened.

Nina, Jeb’s mum agreed, and said she was shocked the law even existed.

‘‘The kids have been raised to respect the police,’’ she said.

‘‘And the police do an amazing job, they do have to deal with drugs, violence and a lot of horrible things.

‘‘But these kids were not being aggressive, there was no backchat, they’re good kids.

‘‘When Jeb told me what had happened I phoned council, but was told we couldn’t appeal the fine as it was handed out by the police.

‘‘When I spoke to Benalla police one officer told me if Jeb fills out the form to say he will go to court the officer who issued the fine might revoke it.

‘‘But if she doesn’t and we have to go to court then Jeb is going to lose a day’s pay.’’

Leading Senior Constable Ross Plattfuss told The Ensign the laws were implemented a few years ago and have had a positive effect.

‘‘It has decreased the amount of public disorders in relation to alcohol on the street,’’ Leading Sargent Plattfuss said.

‘‘That used to be a big problem, but the laws were changed a couple of years ago, it’s not very common nowadays for us to stop people on the street after 11.30 with alcohol, but when we do the laws are enforceable.

‘‘The concept of the law is that all the bottle shops shut and there is about a two-hour grace period between when you buy alcohol and when you get it home.’’

Leading Senior Constable Ross Plattfuss said the best advice was if you had unopened alcohol at a friends after 11.30pm, leave it and pick it up after 9am in the morning. 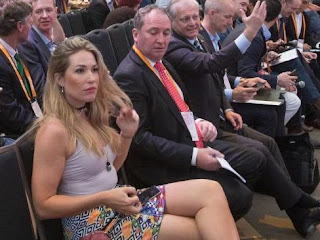 (illustration, The Catholic Mr. Barnaby Joyce, looking lustfully at Vikki Campion, who he later copulates with in order to broaden his gene pool, while himself being married to his wife of 4 daughters Natalie Joyce)

According to Section 48 of the Commonwealth of Australia Constitution Act 1900 (Imp), of course.

Don't forget the sweeping changes the CEO of the country in administration, Mr. Turnbull  introduced.