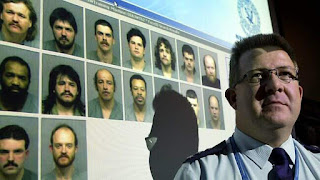 The Gillard Government's new privacy legislation has removed the ban on biometric data being handed to crime-fighting agencies.
Officials say the move could be of immense benefit in fighting crime, but privacy lobbyists liken it to a "Big Brother" development.
The Attorney-General's Department yesterday revealed police would be able to ask private companies - including shops, pubs and clubs - to hand over patrons' facial scans.
"These changes will allow, for example, a pub to pass on to police a face scan of someone involved in a glassing attack," a spokeswoman said.
"Or, police could ask a government agency to help them identify an alleged murderer through matching an image obtained via CCTV (closed circuit television) with client photos."
The spokeswoman said the Privacy Act would not compel any company or government agency to hand over biometric data to law enforcement bodies.
Biometric data has now been reclassified as "sensitive data", meaning government agencies must apply stronger privacy safeguards.
"Information can only be shared with law enforcement agencies in strictly limited circumstances with increased privacy protections," the spokeswoman said.
The power for police to store biometric data that was originally provided for a passport or driver's licence is buried within 290 pages of explanatory memoranda for the legislative amendments, passed during the Parliament's final sitting week this year.
The document explains that the federal information commissioner will draw up guidelines for the transfer of biometric data to crime-fighting agencies.
It cites a "practical example" of the change as "the automatic provision of biometric information and templates by a non-enforcement agency into a database operated by an enforcement body".
"This is currently a gap in the enforcement-related activity exception in the Privacy Act that prevents this increasing activity from occurring,'' it says.
"The privacy safeguard for this new proposal is that the activity in question would be subject to ongoing oversight by the Information Commissioner through guidelines."
Australian Council for Civil Liberties president Terry O'Gorman yesterday blasted the changes as a "Big Brother" invasion of privacy.
He said law enforcement agencies must not be handed biometric data automatically, but they should have to obtain a warrant.
"This is increasing law enforcement agencies' access to data without judicial supervision," he said.
"(This type of scan) is something you never thought - let alone consented - would end up in a police database.
"Databases can be misused, and not just in totalitarian countries.''
Mr O'Gorman said "wishy-washy" guidelines drawn up by the Information Commissioner "will make you feel good, but they're just useless".
"We need privacy cops out there investigating breaches,'' he said.
The new legislation will take force in 15 months' time, to give government agencies and private companies time to comply.
The Department of Foreign Affairs and Trade and the Immigration Department already use biometric facial scans - a digital scan that shows a person's facial contours - stored on a microchip in passports.
And some banks are considering introducing biometric voice recognition data on ATMs.
Biometric scans are also growing popular with pubs and clubs to identify and screen patrons.
Four states are using biometric facial-recognition technology in new licences.

Another bout of false information fed to the 'sheeple'.

This action has nothing to do with crime fighting, but rather the systematic cataloging of the masses.

Criminals still will operate above or with the support of the law.

Data has secretly been collated by the government for years, from various sources including night club venues, a fact the the general populous is not aware of.

With the most recent events unfolding in the corporate media with regards to a prank call made by Australian Disc Jockey’s working at the 2DAY FM radio station, where as a result a nurse in the United Kingdom apparently committed suicide as a result of the call, there are claims of laws being broken.

Naturally all involved claim that no laws have been broken, as any admission would then open the doors to litigation, and most importantly financial penalties.

The corporate media, being part of the top of the food chain, is in lay mans speak ‘above the law’. The corporate media is set up to be the authority’s official propaganda machine, whose job is also to dumb down the masses.

The corporate media breaks various state and federal laws daily, but there is never any action, by corporations or individuals against the corporate goliaths.

Organisations like ACMA (the Australian Communications and Media Authority) work together with the corporate media, and NOT against it, as believed by the general populous.

In New South Wales, where the prank call originated from, under the Surveillance Act,

- the prank was broadcast nationally so any state law applies,

- a person must not publish a private conversation that has been obtained using a ''listening device''.

A listening device means any device that can ''overhear, record, monitor or listen'' to a conversation. It does not matter that the nurse was overseas when she received the call.

There have been many controversial airings of DJ trash speak, which should have resulted in either radio station suspension, or the instant dismissal of the offending DJ, but neither occurs.

Just another ‘institution’ above the law.
Posted by AuCorp at 12:12 AM No comments: