Home and Away star accuses show of racism 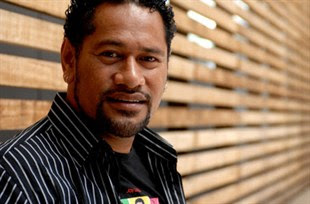 A former Home and Away actor has accused the show's producers of being racist and dumping him because they only wanted one ethnic star.

Jay Laga'aia, who was born in New Zealand and is of Samoan descent, attacked the Channel Seven soapie on Twitter.

"As someone who lost his job on H&A because they couldn't write two ethnics that weren't together, I'd like the chance to ply my trade," he tweeted. Laga'aia joined Home and Away in November 2009 playing Reverend Elijah Johnson.

He worked on the show for several months before leaving to work on a separate project and agreeing to return in November 2010.

He was dropped from the soapie at the end of last year, but his character will continue to appear on the show until April.

His attack comes after Underbelly actor Firass Dirani accused commercial TV networks of having a "white Australia" policy and called for them to write shows for "different cultural backgrounds".

Laga'aia backed his calls, saying: "Hats off to you Firass Dirani, for a call to stop commercial network producers casting only white actors. Only on Australian screens. Shame!"

But Channel Seven has denied Laga'aia's accusations, saying his contract ended because his character's storyline had "reached its natural conclusion".

The Australian mass media, has a strong Anglo-Masonic influence.

There is definitely a racist undertone from the corporate media rulers, as it is also about giving money for their brethren.

Jay's words definitely do have merit, but since he is up against a corporate Goliath who has the final word, there is no hope of the truth ever coming out from the media.

Deception and false information is the order of the mass media, and 'circumstantial' evidence is the reasons for his dismissal. 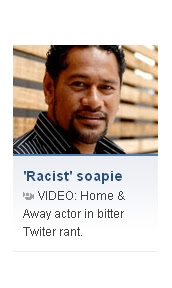 To make matters worse the mass media has 'twisted' the facts around and have defamed the soapie star, accusing him of being racist.

Since they hold the balance of power, they can print whatever they like without any consequences.
Posted by AuCorp at 10:04 AM No comments:

The audit found that major statements in a $4.2 million mailout of a Clean energy future booklet last year were not properly referenced.

And a rushed process to get the pamphlets into letterboxes ‘‘further eroded the capacity of the tender process to maximise value for money’’.

The Opposition has leapt on the report’s findings, saying further advertising in the lead-up to the carbon tax’s introduction on July 1 should be halted.

But the Government said the Auditor-general eventually found the ads were ‘‘factually accurate’’ and not party-political.

The audit found the campaign could have had ‘‘greater discipline’’.

Here is another example of the 'money for mates' deals where for breaching the law regarding misinformation, it is seen that the ads were ‘factually accurate’’ is a blatant lie.

The truth on the other hand is that the 'top dogs' will never be penalised for same offenses the masses commit. 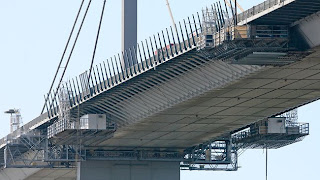 THE State Government has assured motorists the West Gate Bridge is safe after reports of cracks.

A VicRoads briefing obtained by the Opposition reveals at least $10 million a year will need to be spent on bridge maintenance.

The briefing refers to a major structural review conducted in 2004, and the strengthening work that was recently completed.

Roads Minister Terry Mulder said there was nothing alarming in the briefing.

"That bridge has been given a sign of approval by the Auditor-General and it's won an award for the work that's been carried out on it," Mr Mulder said.

"The work that we've done in the last three years has put it into tip-top condition," Mr Gidley said.

He said fine cracks in the steel needed to be treated, but were not a concern to engineers at this time.

Another blatant lie perpetuated by the government in the face of the public, which can endanger the lives of motorists travelling along the bridge.

Candid interviews have been made with engineers working on the project tell a different story.

The bridge was NOT designed to carry the current throughput of vehicles, neither in weight nor with the oscillations they produce.

This problem is further compounded by the fact that the government has opened up a previosuly designated emergency lane to traffic.

A coverup is the order of the day in order not to alarm the masses, nor to show inadequate planning or rather a failure of town planning by authorities.

Australia is truly a 'backwards country' with respect to road planning as described by a German engineering consultancy firm hired to asses Melbournes traffic woes.

Posted by AuCorp at 6:59 AM No comments: 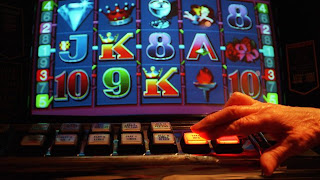 PROBLEM gamblers trying to quit the habit by excluding themselves from Victorian gaming venues are being redirected, via a pamphlet, to a phone line that invites them to set up a phone betting account.

Anti-gambling groups have lashed the Baillieu Government, AHA Victoria and Clubs Victoria for approving the pamphlet, which last night was still available at hundreds of venues throughout the state.

After being contacted by the Sunday Herald Sun, which obtained a copy of the leaflet and recorded the phone message, the Government said it had ordered a review of self-exclusion advertising.

The self-exclusion leaflet details how gamblers can seek help and ban themselves from state gaming venues.

Under a section titled "Can I exclude myself from Crown casino and the TAB?", it lists a number to call for help. But a punter calling the "help line" is patched through to TAB Sportsbet and given only two options - setting up a new phone betting account or accessing an existing one.

"If you have an existing TAB account, press 1," the recording says.

"If you wish to make inquiries about opening an account, press 2."

But he was not surprised at the gaffe, saying "countless people" told him similar stories.

"The fact self-exclusion is run by the gambling giants is also a case of Dracula running the blood bank or the fox in charge of the chicken coop," he said.

"It takes an enormous amount of strength to make a phone call to seek exclusion. It takes overcoming shame and to then be treated with such contempt is quite devastating."

Paul Price, a spokesman for Gaming Minister Michael O'Brien, said the brochure was funded by the Government and distributed in March last year.

The Department of Justice became aware the number connected to the TAB instead of its self-exclusion program on January 5 and ordered that the number be removed from future pamphlets.

"The Government agrees that it is more appropriate for a dedicated telephone number to be available for this service," he said.

"The minister has also asked Tabcorp to review its own material promoting BetCare, including Tabcorp's website, to ensure that the direct number is promoted. Tabcorp has undertaken to do so.

"The Government is currently undertaking a review of self-exclusion programs and will examine access to wagering self-exclusion as part of that process."

"People trying to quit punting through this are actually being told how to bet more," he said.

Gambling destroys lives, as portrayed by television commenrcials sponsored by the government, so a 'helpline' is allegedly set up to 'help' problem gamblers.

There is no policy, or even implied intnetion to reduce this income for the government to the benefit of the community.

Another farce in the face of the general populous.

Posted by AuCorp at 6:31 AM No comments:

Two young men who became "friends" with a teenage girl on Facebook and later had group sex with her have avoided jail.

Waide Symes, of Cribb Point, and Neil Raymond Clark, of Hastings, are now registered sex offenders for life and have been ordered to perform unpaid community work. They have also had jail terms suspended.

The 19-year-olds pleaded guilty in the County Court to several sex offences including, respectively, four and three counts of sexual penetration of a child under 16.

In sentencing this morning, Judge Paul Lacava said jail terms for the teenagers would not be in the interests of them or the community given their remorse, plea of guilty, strong family support, work history and prospects of rehabilitation.

The Office of Public Prosecutions did not oppose the imposition of a non-custodial term.

A third offender has pleaded guilty in a Children's Court to the group sex counts.

The judge said that the sex was consensual and there was no drugs, alcohol or inducement involved.

Symes' offending also included two other young girls, who he asked to touch his penis on separate occasions. Both refused but he forced one to do so.

Neither had any prior convictions or other matters pending, he said.

The Australian government letting rapists go free, is another example of how little regard there is for sex crimes comitted against women.

If the sex crimes were committed against the judges own children, then the punishment would be different.

Since these crimes are committed against the children of the canon fodder, there is little consequence.

Posted by AuCorp at 6:23 AM No comments:

POLICE are facing another racism row with officers accused of abusing and assaulting a young Ethiopian man suspected of stealing a car.

Nasir Bare claims he was handcuffed, kicked and had his teeth chipped by officers who pulled him over in February 2009.

Mr Bare, who was 18 at the time, claims the arresting officers said: "You black people think you can come to this country and steal cars" before he was sprayed with capsicum.

Mr Bare, who is backed by the Young People's Legal Rights Centre, complained almost a year later, claiming Victoria's Human Rights Charter gave him the right not to be "treated or punished in a cruel, inhuman or degrading way".

"He said that one or more police officers had used force against him; pushed him against a car; handcuffed him; kicked his legs from under him ... and kicked him in the ribs," court documents allege.

The allegations were aired in the Supreme Court this week during legal argument over the Office of Police Integrity's decision not to investigate directly, but refer the complaint to the police ethical standards department.

The court rejected arguments the OPI had abused its power, but the incident is the latest in a series of racism rows involving Victoria Police and the state's African community.

Last month, two African men launched a compensation claim with the County Court alleging they had been called "black c---s" during a raid over a stolen packet of chips in 2009.

The compensation case is at least the third launched this year by Africans claiming racial abuse by police.

African youths living in the Flemington area also have complained they have been subjected to racial taunts by police after being backed by community legal groups.

Despite the allegations aired on Monday, Victoria Police said it had no record of Mr Bare's complaint.

Despite the fact that there is racism amongst minority sections of the community and also from governance, the racist slur is being thrown around too much.

Many migrants also use the 'racist' excuse as a means of getting away with either crime or even work.

In the services fields for example cleaning, where migrants are used as cheap labour by the corporations, there are many examples of African nationals accusing their co-employees or even bosses of racism when they are told to do some work, and not to stand around.

This is more common than the 'alleged' isolated cases of racial abuse by authorities, as shown in this example.

Posted by AuCorp at 6:11 AM No comments: