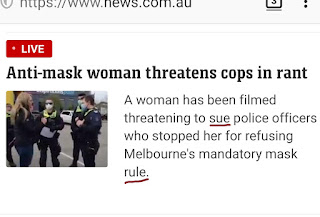 What’s going on in this crazy colony?

Are the police running amock, untouchable by the law?

Has a ‘person’ got the right to sue an employee of Victoria Police?

Surely the mainstream media has broken Commonwealth law there open to a lawsuit but we’ll leave that for another day.

1). Does a ‘person’ while on foot have to stop for police for their questions?
- No
.
2). While in a motor vehicle does a person have to give any other information other than their name and address?
- No.

3). Does a Victorian (non-commercial) driver have to produce a licence upon a police officer’s request?
- No, not if over 26 years of age.

5). Does Victoria Police fine drivers (over the age of 26) or threaten drivers with a fine, for not producing a licence?
- Yes.

P.S. This post is about the law and not on the topic of public health.
Posted by AuCorp at 9:08 AM