How the police support criminals

The actions of police may seem to baffle the herd populace's most brilliant minds.

One example of this is when a member of the herd traveled in their automobile at a velocity of  5km/h greater than advertised, got caught, by Victoria Police, their matter was listed as a 'criminal' matter in court and did not get away with it. Conversely,  another person who travelled on that same stretch of road at 100km/h over, got caught, and got away with it.

To anyone involved in the legal business, including police cadets,  one of the basic principles learnt  is that in order to obtain a successful conviction all the evidence presented must be obtained within the specifications of the current laws (read Acts).

Please note that the police apparently act in "the interest of public safety"  meaning carry out actions that keep the public safe.

To the uninitiated Victoria Police has very strong ties to the brotherhood.

As members of the brotherhood will know their members have various levels of knowledge and skills that are reflected in the role and ultimately the club they belong to.

The bottom feeders/foot soldiers may only be involved in a task that the club is tasked to do, completely unaware of the activities and contents of policies their higher up brethren carry out.

Do  dodgy organisations need to advertise that they help special people in order to cover up some other activities that are 'morally' / legally wrong?

A person who has stated that they wish to remain anonymous, for fear of reprisals, was at a brotherhood meeting, where various heads of state were present, including Victoria Police.

During this meeting various topics were covered including crime.

It was stated that the crime level needs to be at a particular rate in order to keep the masses fearful and under control.

As the general populous should know, the 'crime rate' is administered by a branch of the executive called the police, who the government (today, a corporation conglomerate) administers.

The police also work alongside with criminals like in the very public matter of notorious drug king pin Carl Williams.

What many people may not be aware of that the police also support certain criminals, and allow them to continue to commit criminal activities.

This (supportive) action may occur on various fronts, where police are given the order from the brotherhood, not to pursue criminal charges, or where police officers themselves directly associate with the criminals for personal gains.

In the latter example if the details were made public, the police would be supported by the brotherhood and exonerated from any wrongdoing.

On example of letting the criminal go, for whatever reason, is to 'botch' an investigation where the evidence collected, and the matter brought before the court is not according to the law, which means all charges are dropped against that person in relation to their criminal activity.

What a logical reaction would be is that the police officers involved should be ejected from the police force, as they are incompetent, putting the general populous at risk, but instead they are kept in the 'force' to allow other criminals to roam free as directed by their superiors.

Also note that Australian police 'force' started off literally as a criminal organisation, i.e. an organisation made up of criminals or rather convicts, just really really good behaved ones.

It may seem that it is not the criminals that are the real danger to society but rather the people who administer them.

The illustration below of the headline Mitchel beats rap (HeraldSun Sat, 28 May 2016) is just one example of how police let (supported) criminals get away with it. 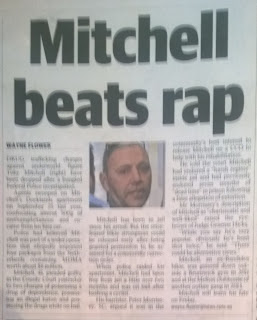 or you can read the article from the same publication of the headline:

Tests later found the purity of the drug ice to be 259 grams and the cocaine 127 grams.

Police had believed Mitchell was part of a wider criminal operation that allegedly imported four airmail packages from the Netherlands containing 32 kilograms of MDMA worth about $8 million.

Mitchell, 41, today pleaded guilty in the County Court to two charges of possessing a drug of dependence, possessing an illegal baton and possessing the drugs while on bail.

Mitchell has been in jail since his arrest, spending most of his time in isolation.

But the once feared bikie strongman could be released early after being granted permission to be assessed for a community correction order.

Mitchell had been free from jail a little over two months and was on bail after bashing a cyclist when police came knocking.

Toby Mitchell with his lawyer outside court in September. Picture: Jay Town

His barrister, Peter Morrissey SC, argued it was in the community’s best interest to release Mitchell on a CCO to help with his rehabilitation.

(Absolute garbage statement! It's in the community's  interests that this drug trafficker stays behind bars as there is no chance of rehabilitation)

He told the court Mitchell had endured a “significantly harsh regime” inside jail and had previously endured seven months of “dead time” in prison following a false allegation of extortion.

Mr Morrissey’s description of Mitchell as a “charismatic and well-liked person” raised the eyebrows of Judge Graeme Hicks.

“While you say he’s very popular, obviously he’s been shot twice,” he said. “There could be alternative views.”

Mitchell, an ex-Bandidos bikie, was gunned down outside a Brunswick gym in 2011 and again in 2013 at the clubhouse of another outlaw gang in Melton.

Prosecutor Daryl Brown argued Mitchell should be locked up for no less than two years, which would not allow the judge to free him early in a CCO.

“Two years are within range,” he said.

Mitchell will learn his fate next Friday. 3rd of June 2016