Police committing criminal offences above the law, unaccountable, that’s life in a colony, a police state. 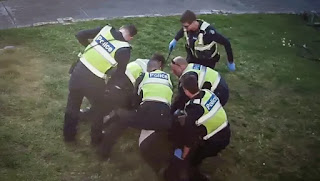 “No person is above the law” is a common (propaganda?) term used by authorities, where the serfs could swear that there was a caveat or fine print to that, where it excluded the people in ‘government’ as seen in many examples, excluding a few that did get caught and (allegedly) sentenced.

From the beginning of colonisation,up until a certain time police or at least Queensland police could commit criminal actions against the serf population with impunity, zero consequences and they knew it, because their 'brethren' in parliament set the law up that way.

In Victoria 8 (eight) police thugs beat the living daylights out of a woman, a woman called Corinna Horvath, where she had to obtain a remedy outside the colony, but that’s not the focus of this article.

The court system trying to cover this abuse of a homeless man Mr. Bruce Rowe made sure he was not successful in his claims.

It was only after the Court of Appeal, where Mr. Rowe was able to obtain a remedy, but not from the system, but rather in a ‘private prosecution’.

In a response the police stated:

"In fact police officers may as well stay inside a police station and not do anything because of fear of what the law could do to them," Mr Leavers said.”

So does that mean the police are not able to carry out their duty of protecting the peace, preventing crime and preserving life and property, without breaking the law?

But the law applies to every person, doesn’t it?

So now what are people going to do in those instances where police broke the law in order to obtain a conviction/charge/fine, etc?

We live in a colony (called Australia), and therefore ‘Penal Colony Policies’ apply.

See article from 8 Mar 2011 by The Sydney Morning Herald

If you cannot see/download the above pdf, try the link below in  new window:
https://drive.google.com/file/d/1-JDadB_9mtwOPKo-C4sxFeLRRsWpXdCu/view?usp=sharing
Posted by AuCorp at 9:48 AM