The mass media can / does propagate false information as part of an agenda.

Similarly the above headline is entirely false in its meaning.

According to several sources, Roman Polanski was born Rajmund Roman Liebling (August 18, 1933), in Paris, France (therefore he is NOT Polish) to Russian-Jewish parents.

It's like saying that Russell Crow is an Australian, which he is not, but a New Zealander.

The allegation of "unlawful sexual intercourse with a minor" is NOT entirely correct either.

At the time the girl at the centre of the allegation purported to be 18 years old and definitely looked older than her actual age.

It was a well known fact at the time on the set that the 'romancing' was occurring, and her parents were always near. Others were acting in a similar fashion towards other 'underaged' individuals., but no action was made against the others, only against Polanski ( Liebling ), when he became 'uncomfortable'.

During the Communistic era of Poland, Roman made a few controversial films which did not go well with the authorities.

When he came to America (the land of supposed free speech), he also made a film which was not to the liking of the Zionist financiers. 'They' then killed his then pregnant wife in a macabre manner, and the Authorities did NOT pursue the killers.

It was only via the connections of his wife's father that the killers were found, with plausible story to suit.

Australia is steaming ahead as the fastest growing industrialised nation - with the population set to explode over the next four decades.

As well as importing more people, a baby boom is on its way - so get ready for those baby showers. It’s a proven fact that in tough economic times couples stay at home, make hay and the birth rate soars.

If the G20 leaders lined up in order of expected population growth, Kevin Rudd would be in 2nd place – behind King Abdullah of Saudi Arabia.

No wonder Rudd is smiling in the midst of our recession riddled cousins.

We even beat India and China hands down. Australia is expected to grow at a rate of 65 per cent - well above the global average - according to a survey by the US research group Population Reference Bureau.

Our own Australian Bureau of Statistics conservatively estimates the population will balloon from the current 21 million to 34 million by 2050. While Wayne Swan says Treasury estimates are closer to 35 million – quite a leap.

This presents an enormous opportunity to small business owners.

“In the federal treasurer’s own words, small business is the backbone of the Australian economy – and he’s right on the money,” said COSOBA the Council of Small Business of Australia.

With half of all private sector employees employed by SMEs (small to medium enterprises) the market is going to play a critical role in keeping Australia afloat.

What does this mean? It means we will be facing more people, needing more products and services - which at the moment are increasingly supplied by SME’s.

The SME sector is the life blood of our economy - so it is more important now than ever that SMEs prepare for this future.

Prepare, via long term strategic planning. Global, rather than local, thinking. And by increasing brand recognition.

With Australia increasingly providing assistance to poorer nations, we should also be faced with more export opportunities for SMEs.

So it is vital that our internet presence is mature and sophisticated enough to attract and reassure international enquirers.

However, on the flip side, we are facing:

We really do want a restoring of confidence in the sector. Yes, the Government handouts are helpful, such as the:

As the backbone of the Australian economy, our characteristics are flexibility, resilience and hard work.

There is no doubt in my mind, that it is small business that has the capacity to capitalise on the recovering economy and exploding population if it is supported by the Government to do what it does best.

NO ONE WINS except the MULTINATIONALS.

A disturbing article out of the Courier Mail over the weekend reports that young children are sporting a fashion trend with an underlying sexual meaning.

Known as shag bands, it is said that if you break one off someone’s wrist you must then, depending on the colour of the bracelet, deliver a hug, kiss, or something far more sexual...

Author of ‘Getting Real: Challenging the Sexualisation of Girls’, Melinda Tankard Reist joins the show.

This is a typical move to degrade the children of the masses, and society in general.

What is MOST disturbing about this is that on the surface the problem is being combated, BUT beneath it is being supported by the various authorities.

Posted by AuCorp at 5:23 PM No comments:

Telstra - No internet for new homes

In 2009 in one of supposedly the most 'developed' countries in the world, Australia is lagging behind in the Telecommunications arena.

The public are being wooed by companies and governments with terms live eco-friendly, solar electricity, etc.

New modern homes have options like c-bus (home automation), solar electricity (which is useless in the less sunny areas like Victoria and Tasmania, Water storage tanks (which has come too late and should have been implemented in the 1960's), BUT lack one of the most fore granted technologies, the INTERNET.

In a political move, Telstra is DELIBERATELY not installing enough telephony equipment in the exchanges to cater for new homes to be connected via the telephone line (copper) for ADSL technology.

This is a deliberate move to force customers to use more expensive (usually 2 or 3 times more, for the same amount of data) options, i.e. cable or wireless broadband.

This practice has been going on for over 15 years and NO Australian consumer watchdog (ACCC) NOR the telecoms ombudsmand has done anything about it.

Posted by AuCorp at 3:57 PM No comments: 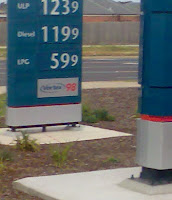 During the festive season, i.e. Public / Religious, and school holidays, the general public are treated to a price rise in fuel, from the petro chemical giants.

Media outlets warn motorists to stock up on fuel before certain days, BUT petro chemical bosses deny any wrong doing.

The photo above was taken on the first day of the school holidays, and illustrates that Caltex sells:
fuel at

LPG prior to the school holidays was selling at approx 45 cent per litre, has increased 15 cents per litre or an astonishing 30% OVERNIGHT.

This is a fraudulent practice by the oil companies holding the motorist at ransom.

Many Australian Motoring bodies concede that the motorists are being ripped off, BUT no government is taking ANY active resolution.