The US government has released video of its latest weapon that looks and moves like the murderous Skynet flying droids from the Terminator movie series — and the name is just as menacing.

The Multiple Kill Vehicle (MKV) robot, built by defence contractor Lockheed Martin, is designed to be mounted to a carrier missile shot into space to take out enemy nuclear missiles.

The video shows the MKV using small rockets to hover and track left and right inside a special test facility at Edwards Air Force Base.

According to the Missile Defence Agency, during a ballistic missile attack a carrier with a cargo of small kill vehicles get in the way of any enemy missiles.

"Using tracking data from the Ballistic Missile Defence System and its own seeker, the carrier vehicle will dispense and guide the kill vehicles to destroy any warheads or countermeasures," a press release from the MDA stated.

Lockheed-Martin rival contractor Raytheon is also developing its own MKV.

The MKV is just a small piece in the puzzle that makes up the US's controversial missile defence shield, referred to as "Star Wars" when first announced by the Reagan administration in the 1980s at the height of the Cold War.

What began as the Strategic Defence Initiative in 1983 became the Ballistic Missile Defence Organisation in 1993 before being renamed the Missile Defence Agency in 2002.

President-elect Barack Obama has publically criticised the highly complex program, which will cost an estimated A$80.6 billion between 2004 and 2009, saying he would not "weaponise space".

Will they use this technology for :

A). Invading another country that hosts 'terrorists' in order for the financiers to gain control of the Oil reserves or (makes billions = good )

B). Use the technology to fight the violent decapitations by the drug cartels just south of the Texas border, that distribute DRUGS that KILL more Americans, than any external terrorists acts. (lose billions = bad)

Posted by AuCorp at 5:20 PM No comments:

The Federal Court of Australia has ordered national carrier Qantas Airways Ltd to pay $20 million in pecuniary penalties for breaching the price-fixing provisions of the Trade Practices Act.

The Australian Competition and Consumer Commission (ACCC) instituted proceedings in October 2008 alleging Qantas had reached an understanding with other international airlines in relation to the imposition of fuel surcharges on air cargo across its global networks between 2002 and early 2006.

The ACCC said Qantas admitted to making and giving effect to the understanding, repeatedly exchanging assurances among airlines in the implementation of fuel surcharge increases and reaching local agreements in certain Asian countries collectively.

ACCC chairman Graeme Samuel said the penalty reflected the seriousness of the contraventions and Qantas' large share of the market.

"Cartels - particularly those that are engaged in by large businesses with broad application over a period of time - have a significant effect on consumers," Mr Samuel said.

"They are an unseen fraud on the community that must be uncovered and punished." (lets NOT just stop at one company, Mr. Samuel, TELSTRA has been named, and ASIC has all the relevant paperwork,and SLATER & GORDON has confirmed it is FRAUD! What more do you NEED ??? !!! ??? !!! )

He said Qantas had undertaken an exhaustive probe of the allegations after being made aware of the conduct.

Qantas has been restrained from engaging in similar conduct for three years and ordered to pay $200,000 towards the ACCC's costs.

The Federal Court also ordered British Airways PLC to pay $5 million for price fixing in relation to fuel surcharges applied to international carriage of air cargo between 2002 and early 2006.

British Airways has reached agreement on the penalties after admitted it arrived at an illegal understanding with Lufthansa on fuel surcharges on some of their international air cargo services.

Mr Samuel said the case should send a strong message to cartels.

"That the ACCC will not relent in its pursuit and the bringing to account of those who engage in illegal behaviour," he said.

"There are no safe havens for illegal cartel conduct.

The court also restrained British Airways from engaging in similar conduct for a period of five years and to pay $200,000 towards the ACCC's costs.

In another matter regarding corporate fraud, Telstra is responsible for a fraud that is worth approximately $10 million per year, BUT all the relevant channels WIPE their hands clean, as at the time Telstra was government owned, and NO GOVERNMENT wishes to implicate itself.

Since Telstra is now under the leadership of Solomon Trujillo, who resigned as CEO of US West Communications Inc. See excerpt from the now deleted article from Wikipedia :

there is NO hope of the wages fraud seeing the light of day in ANY court. 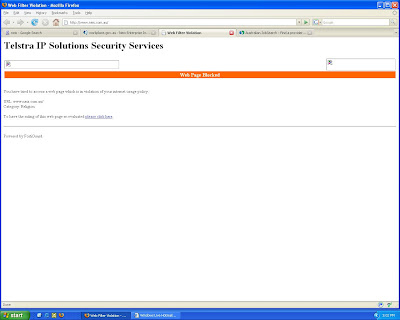 Here we have a classic example of how Internet Censorship DOES NOT WORK.

The site put into the browser is www.neis.com.au which is a program called NEIS (New Enterprise Incentive Scheme), for unemployed people, set up by the Australian Government.

A statistic pull out from someone's hat suggests that 60% of internet traffic is peer to peer (i.e. file sharing - of movies / music??).

The fact is that the government is under intense pressure from Corporate giants MPAA (Motion Picture Association of America, and the Music Industry, as they CLAIM they are losing millions.

This is another example of how Corporations DICTATE political agendas.

Maybe the Government dos not want you to have a New Enterprise Incentive Scheme idea so you may succeed?

Posted by AuCorp at 4:08 PM No comments:

Police said the 32-year-old Caulfield man's death is not thought to be suspicious.

Mr Marsland co-hosted on Triple M with Pete Helliar and Myf Warhurst after starting his radio career in Adelaide on the SAFM breakfast show with Greg Fleet, Marty Sheargold and James Brayshaw.

He also co-hosted a live, daily morning program AM Adelaide on Channel 7, Adelaide with the multiple-Logie award winning Anne Wills, and then hosted The Late Date Show nationally with Bessie Bardot on 2DayFM, 92.9 and FoxFM.

"Everyone he worked with was impressed with his professionalism and dedication and he had an extremely bright future ahead of him," Mr Amarfio said in a statement.

"We thought so highly of Richard that we were expanding his role in the show next year.

"Our thoughts are with his family and loved ones at this difficult time."

Again we have a report, that does not mention the cause of death. Since there are apparently no suspicious circumstances, it therefore looks like a suicide.

If we have a moderately high profile figure, who's cause of death was suicide, for whatever reasons, depression etc, then the public should be made aware, and help offered to others, as it has been done in the past with other 'celebrities'. 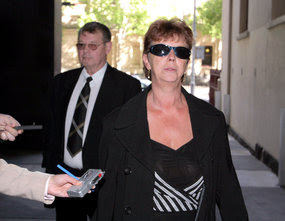 Barbara Williams, the mother of convicted killer Carl Williams, has been found dead in her Melbourne home.

Citing police sources, Sky News reported that Ms Williams' body was found in a bedroom in the house, adding the only indication as to what had happened was a medicine bottle being found nearby.

Police say there are no suspicious circumstances.

"This is a very sad and tragic case. Here's a mother who has brought up her children the best that she can," he said.

"With all the publicity that's gone on, that's probably contributed to her depression."

Williams was sentenced in May 2007 to a minimum of 35 years' jail for the murders of three Melbourne underworld rivals - father and son Lewis and Jason Moran and drug dealer Mark Mallia.

Nothing new about this story EXCEPT that the report made by the general media is the allusion that she committed suicide by a pill overdose, which is incorrect.

A source closer to the actual event, stated that Barbara Williams hung herself.

There is NOTHING NEW about media deliberately withholding information from the public, for whatever reasons seen fit by the editors / politicians of the day.

Posted by AuCorp at 3:27 PM No comments: