Innocent until proven guilty - out the door in Australia.


Human Rights activists, constitutional experts, legal beagles (yes beagles and not eagles, as these animals have their snouts up the system's arse crack it's not funny) should be outraged at this reality that's been going on in this colony for quite some time, but this is swept under the red dirt, as it's a phenomenal cash cow for all those involved, i.e. lawyers, courts and obviously the government.

Once you're accused by Australia's most powerful businesses, that tax business or the welfare business, first and foremost they deem you guilty of the alleged offence where you must pay their alleged amount otherwise they will steal those numbers from a bank account that is in your name.

Let's take a look at the millions of criminals on Australian roads.

When a person commits an road offence, e.g. an action alleged by an inanimate object, a speed or red light camera, this is classified by the lawmakers as a criminal offence and not a civil one, as seen in the state's court lists.

The degree of being first and foremost guilty is defined under strict liability or absolute liability.

Further entrapment in the con, is on the back of the police paperwork, where the unsuspecting motorist is conned into signing a form that the person 'elects' to take this matter to court.

If your person is being accused of something it is up to the accuser to initiate court proceedings and not in the hands of the defendant to do so.

This is one of the largest con jobs against the motorists of Australia, by the police and all others involved, that is being deliberately overlooked. 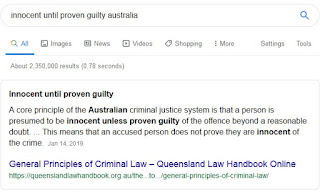 Give thieving telcos the boot, but not in Australia

Australia's telcos are rife with actions of consumer rip offs, fraud, taxpayer mismanagement where in the days before the smartphone revolution, and call logging devices, which were incidentally banned at one time, it was difficult to prove allegations against the telecommunication's monopoly but also a court that would accept such a pivotal matter.

We have known for quite some time that Australia is (deliberately) behind in imported tech available to the general population, where this policy is still current today.

Oppo, the biggest smartphone manufacturer in China, has put together a phone that can be used without the need for rip off merchants called 'telcos'. 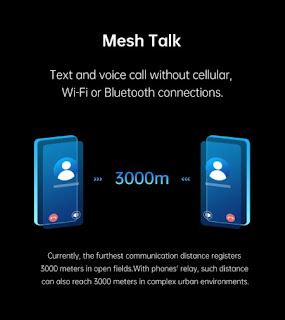 The Trump 'administration' banned Huawei citing security issues, whereas the company is a global distributor with a huge large market share, larger than what anything the US 'produces'.

Could this be a precursor to another ban, maybe for Oppo, citing whatever excuse, where the real reason would be to protect the rorting telecommunications industry?

Anyone care to take a stab in the dark when/if the Australian serfs will get this device after its release to overseas consumers?

See text from article from 26 Jun 2019 by gsmarena of the headline:

While makers and carriers are talking up the benefits of 5G, Oppo is asking another question – what if there’s no cell connection, no Wi-Fi or Bluetooth? It introduced a system called MeshTalk which can send data between devices up to 3km apart.

We imagine that this is with a clear line of sight. Still, as the name suggests this is a mesh network – it can route the message through several nearby devices so it can reach its target, even if it’s too far for a direct connection.

It’s a low-power system too, Oppo wants to build phones that can last 72 hours in standby with MeshTalk active. This will be great in emergency situations, of course, but also just to cut down your monthly bill as you can reduce your reliance on carriers.

Oppo didn’t reveal what kind of tech is behind MeshTalk or when the first phones with it will be available on the market.

Posted by AuCorp at 6:55 AM No comments:

The corporation aggregate that is called the 'Australian Government' (a 'Human Rights' abuser - if you want to go down that track) runs this colony on a tight rope.

The people in government punish their poor, weak and vulnerable tax slave population, while rewarding the rich and powerful, basically adhering to the law of the jungle i.e. survival of the fittest.

The weak and vulnerable get audited, scrutinised, accounts garnished and a jolly rogering by the tax department:

while others 'get out of' paying any tax whatsoever: 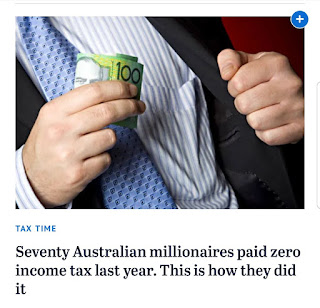 and there's so many more from the 'brotherhood' (oops 'conspiracy theory'... lol) that the mainstream media dare not mention.

Australia is a police state ruled in secrecy, where when 'they' (the people in government) talk about transparency, they don't mean being transparent about their corrupt business deals or their 'money for mates' tenders or jobs created for useless family members or the Queen's (of the U.K not Australia,silly) Whitlam letters, they mean transparency regarding the serfs, which even includes what they throw away.


(Imagine a picture of a see through bin, as Google will not allow the blog 'Corporate Australia' to upload photos)

There is a huge drive for zero road deaths, where the marketing campaign is called Towards Zero, where the authorities know that this figure realistically will never be achieved.

A screenshot (which which we cannot publish as Google does not allow it to be uploaded) of an article by news.com.au talks about how the Australian car industry REFUSES to publish manufacturer's quality of vehicles, something that could also effect the lives of motorists and pedestrians.

The police state's secrecy at its finest.

As of a few hours ago we are able to post photos.

These are the photos that we were not able to post: 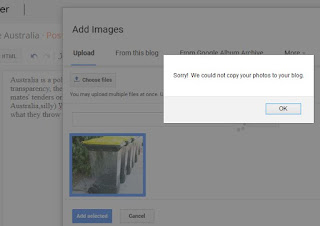 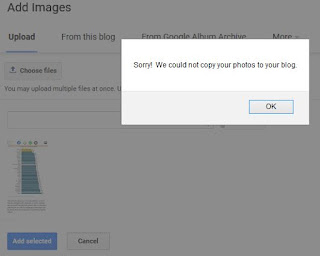 Posted by AuCorp at 9:05 AM No comments: