Deputy Chief Medical Officer NOT fined for telling you to use the app. Why? 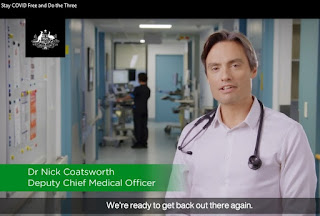 Currently  during these ‘unprecedented’ times (well, the ‘precedence’ was already set during the Spanish flu in 1919), we are experiencing  a barrage of messages over the television air waves.

These messages come in the form of an advertisement, which means it is an ‘enticement’ or an action in telling you to conduct business/commerce/trade, where this message is not a ‘public notice’. 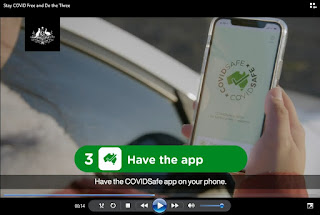 Dr. Nick Coatsworth,  is telling you to purchase an app from either Google or Apple BEFORE you leave your place of residence.

The business that is supporting his words is the 'Australian Government'.

Putting aside the legalities that people in your contact list are being traced WITHOUT their consent, there is a newly placed law that PROHIBITS a person or business to require the downloading of the app.

94H  Requiring the use of COVIDSafe

(1)  A person commits an offence if the person requires another person to:
(a)  download COVIDSafe to a communication device; 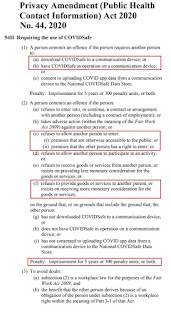 So, let’s be very clear about this:

Dr. Nick Coatsworth is telling you to purchase the app, illegally.

The business that one works for is also subject to penalties, in this case it is the ‘Australian Government’.

Will Dr. Nick Coatsworth be fined or imprisoned?

Is he above federal law?

Posted by AuCorp at 4:22 PM No comments:

eMail is INSECURE yet governments & businesses insist you use it, why?

‘Punishing’ you for not using eMail.

Governments (there are only two legitimate in Australia, federal and state) and businesses are punishing charging you an extra few dollars for obtaining a bill via the postal service, and pushing you towards eMail as a means of communication.

Currently in the illustration above it is your choice whether or not to obtain your rates notice via eMail, where at some point there will be no choice whatsoever, which is not very ‘democracy’ like, where most people will not care about this detail and if they wake up it will be too late.

This post has been deliberately structured to stay away from the technical aspects covered in this post, where those who require more information can search for it from technical sources.

People should know that the ‘internet’ is a government resource where electronic mail is also part of this communication medium.

Government (and business) Information Technology administrators (should) know that email is insecure, as they themselves are able to read their bosses emails without that person knowing or being aware that their company email was read.

Since their inception, the fundamental protocols created for email communications are insecure, where clear text is passed over the internet from one recipient to another across different email addresses, e.g. someone@gmail.com to someone.else@yahoo.com.

Over the years ‘encrypted’ email may have wrapped up a security envelope to the context of the message, but the other ‘metadata’ necessary for communications purposes still can be easily read and used against the sender and/or recipient.

An encrypted eMail may be safer (from other users reading it) within the same domain (or business),  but it stall can be read by an ‘administrator’.

Since inter domain email is insecure, e.g. your ‘Constitutional Argument’ regarding fines in Australia filing within the High Court of Australia, from your email at say JohnCommonwealth@gmail.com to whoever@hcourt.gov.au, why do they ‘insist’ you use this medium?

If one writes a letter to another person, and someone wanted to know the contents of this letter, then one would assume that to do this ‘legally’ there would have to be probable cause where a warrant would have to be issued, to be presented to the postmaster in order to open the letter without the recipient being aware that the contents of the envelope were tampered with upon arrival at the destination.

Now, with clear text travelling over the wire, all the authorities have to do is capture this data WITHOUT any warrant whatsoever and literally read the contents of the message easily and quickly.

To do everything by email, from your phone, via apps and cashless transactions is all part of the mass surveillance agenda where MANY people are helping the authorities achieve their goals VERY quickly.

Don’t forget to stack up those ‘rewards’ from your cashless transactions, where you’ve sold your data to government and corporations for a ‘reward’ that they’ve written off on tax.

Corporate slaves rewarded for their slave mentality.
Posted by AuCorp at 7:20 PM No comments: