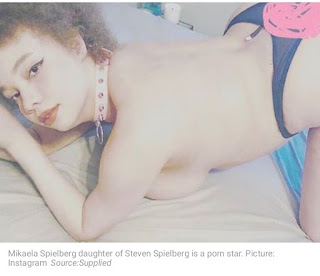 What people in the entertainment industry ‘get away’ with, mere mortals can only ‘dream’ about, if that particular activity is your vice.

Authorities overlook drug use in parties and gala events, where conversely when the serfs attend a music festival they release the hounds on them literally well in Australia at least.

Sexual abuse is rife in the Hollywood and broadly in the entertainment industry as a whole.

MANY persons are silent as their career and livelihood depends on their silence.

Paedophilia is also the industry’s a closely guarded secret, where its victim this time is Steven Spielberg’s adopted daughter Mikaela Spielberg.

The article in the Rupert Murdoch news.com.au online publication’s main focus is on her sexuality and her chosen career path as a sex worker. 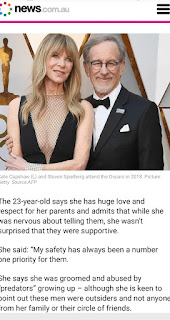 Apparently her sexual abuse was not from “family or circle of friends”.

So then who was it from?

Sweep this one under the (red) carpet?