Unfortunately this problem is just the tip of the iceberg, where the entire legal system i.e. from the administration to the judges, is responsible for the fraud, causing harm, defrauding the good people of Australia of their homes and livelihood.

Will the victims ever see 'justice'?

Probably not, as it's not on the agenda of the administration of this colony.


See article from 26 Nov 2018 by The Age publication of the headline:

A senior Victorian police officer has been charged over an alleged 18-month crime spree that included claims of fraudulently obtaining six properties, rorting Centrelink, postal theft, making false claims to bank staff and claiming she was someone else.

The sergeant from Corio did not face Melbourne Magistrates Court on Monday when the extent of her alleged offending investigated by the Independent Broad-based Anti-corruption Commission was revealed. 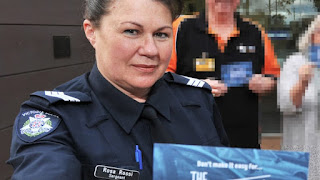 Sergeant Rosa Rossi handing out "Don’t make it easy for the Thankful Thief" brochures during a promotional event in Wyndham in 2016Credit:Damjan Janevski


Sergeant Rossi is accused of deceiving locksmiths to fraudulently take possession of houses in Malvern East, Chadstone, Brooklyn and three rural properties in Willaura, about 230 kilometres west of Melbourne.


On January 4, 2017, Sergeant Rossi allegedly wore her police uniform to the offices of Hobson Bay Council, where she allegedly induced a council employee to provide personal details of an alleged victim.

She also allegedly accessed the police database LEAP, without authorisation, to acquire information about the owner of a Malvern East home in October 2016.

A month later, she allegedly obtained the property by deception after telling a locksmith it was a deceased estate and she was the owner, according to charge sheets obtained by The Age.

An IBAC investigation dubbed Operation Salina also charged Sergeant Rossi with stealing items posted to three of the properties, while also fraudulently claiming rent assistance from Centrelink on behalf of another woman.

Sergeant Rossi, will face other charges of fraudulently claiming her private company Sweet Georgia Pty Ltd was a not-for-profit organisation, while also falsely declaring in a statutory declaration that she lived in Endeavour Hills.
She also allegedly provided false information to staff at the Commonwealth Bank on January 19 2017, when she applied for a loan on a property in Willaura.

And on June 15 2017, Sergeant Rossi allegedly signed a statutory declaration in Werribee that stated her name was Dianne Marshall.

Sergeant Rossi will face a committal mention hearing in the Melbourne Magistrates Court on January 14 next year.

Her co-accused, an inspector who lives in Lara, was charged by IBAC with three offences, including perjury, making a false statement and failing to produce a document.
The 73-year-old is due to appear before the Geelong Magistrates Court in February 2019.
Posted by AuCorp at 9:55 AM No comments:

It's been 100 years since what is called today World War I, where the children of the general population were conned into killing people in other countries, to become cannon fodder for a 'cousin's war', purely for the benefit of those in authority.

Since the internet age, much more information can be distributed via the two copper wires that were referred to once upon a time as the telegraph, where now the serfs can access information that points to wars being called 'bankers' wars', describing the bleeding obvious.

Many people may not realise that the actions of the people in government are not for the benefit of the tax slave population, but rather for the benefit to those who have power, authority and control over the general population.

ONE of the reasons for the influx of 'migrants' in 1788 to this land we now call Australia, was to exploit the resources of this land (to the maximum), for the financial benefit of the imperial government.

The Australian Government allowing Adani to conduct what some people may term as vandalism of the environment, is an example of such policy in action.

Today the people in the Australian Government allowed a mass 'migration' into Australia, for the reason that it's "good for the economy", in the mean time creating many problems for the good people of Australia. 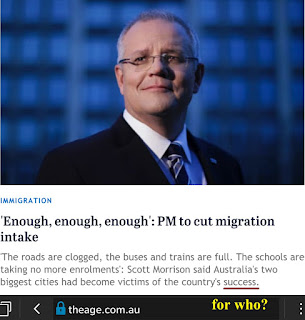 A good example of a problem with regards to the sudden onslaught of human flesh on a city was 'documented' in pop culture in an episode of South Park, where the town is inundated with Hollywood 'stars' where the sewerage system could not handle the excrement from the Hollywood herd, giving birth to the character "Mr. Hankey", the Christmas Poo.

Today the migration into Australia, can easily be called the "bankers' migrants", as this action is for the benefit of the banking community, as one must obtain a mortgage (an engagement until one's death - death pledge) within a bank, where the term is literally headed that way in Australia, where it's already there in Japan as an example.

To the people in government it does not matter if you're employed or not.

If you are feeling down because you cannot find employment, as a result of the conditions created by those in government, then you are prescribed drugs to alter your state of mind, creating huge profits for the pharmaceutical industry, instead on focusing on the cause of your anxiety.

If you had a steady job, then outsourcing fixed you up, where any other imported slave could take your position for one third of the cost to the corporation.

To the people in government who cares if you have cancer, even before your use by date, as there may be 500 other 'applicants' willing to take your place for $30,000 per year less than you were payed.

Whatever low moral value migrants are imported into this colony, it's a 'success story', but for who?

'Low quality' imports, keep the court system busy, where even more staff need to be employed, e.g. police, judges, admin etc, to cater for the crimes committed against the 'good' people of Australia.

An allowed high rate of migration in Australia, causes a 'shortage' of houses, therefore increasing rent, and house prices, therefore putting more tax dollars into the coffers of those in government, where this is the "success story". 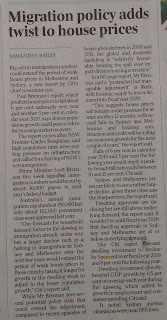 Slavery 101 in the digital world

When we obtain words or information from corporations we obtain directives that entice us into another action in business / commerce / trade with that corporation in the form of an advertisement.

The advertising world is a very tricky one, meaning it involves trickery.

A simple advertisement would be a brochure, a message on the television, or something as subtle as a price list.

A sneaky advertisement nowadays is when a news reader on the radio is conveying news stories, where without any noticeable pause of differentiation from the previous stories, the reader states that "we have 20% off this year's newest arrivals at (retailer's name)".

The postal service is the ol' tried and trusted way of distributing advertising material, where now it's put on the front of an envelope, as seen in the picture below. 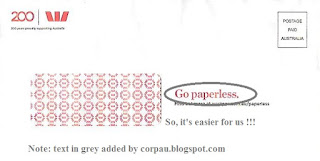 Information today is a much more valuable commodity than good ol' fashioned gold, where any physical product has a 1:1 ratio, compared to 1:Many with regards to this product called (digital) information.

People are being 'enticed' (or rather conned) into providing information in a digitised format, as this is much easier for corporations to distribute than paper.

Australia's previous non compulsory census was done in paper format, where people were enticed to complete it online.

The 'problem' with the census being in paper format was that it had to be scanned, where it was an unnecessary cost to the business, before the information was sold for $41 million (profit) to the Australian Bureau of Statistics (ABN:26 331 428 522).

In order to lower the 'administration costs' the next census will be solely conducted online, where there is no talk (advertising) of a paper alternative.

If people are not given a choice, they do not live in a democracy, but rather a dictatorship, where in Australia, some may have the view that it's a corporate dictatorship.

Only your actions will determine how your 'person' (the product) will be shuffled from place to place in the digital abyss.

'Rewards' (in the form of cheap snacks) are given to puppies that are obedient to their masters, where "rewards points" are of similar calibre for being an obedient corporate slave.

How much did you sell 'your' data today for?

Some people on social media may cry that "we need to help others".

The reality is first and foremost what have others done to help themselves?

Posted by AuCorp at 8:02 AM No comments:

You know the story quite well.

If you're someone from the general population, a serf or tax slave, then the judiciary or more specifically a jury would consider the criminal action of rape a heinous one.

In the case of a Victoria Police employee, then it's just a 'stain'.

You know something that could be removed either with bleach or with something called time or even a corrupt system that will remove all reference to the criminal action.

But don't forget to pay your (unlawfully issued) fine or they WILL sell the land you live on from right under your feet.

Well, you know that's life in the colony called Australia, the 'lucky' country, well not for its victims of crime anyway. 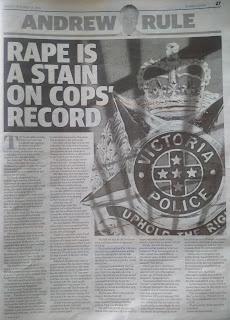 Posted by AuCorp at 7:05 PM No comments:

You know the story quite well.

The police will advertise their strong arm policies on drink driving, where the excuse is that if it only saves one life it's worth it.

There is literally no excuse for driving while drunk, right?

Well that may be the case if you're a serf or a tax slave.

The reality is different if you're a member of the government, or even a wife of a politician who's 'off her tits' (Aussie slang for drunk as a skunk), while in charge of a motor vehicle, who caused an accident, but the police deliberately let her off.

The best about part about the matter below is that the tax slaves payed $150,000 defending this drink driver  cop.

Just a reality check of:

- How corrupt the system is,

- What the cops can get away with, the serfs can't. 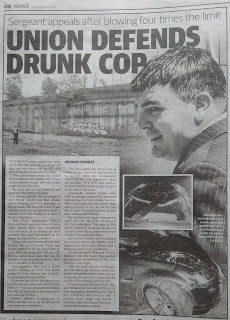