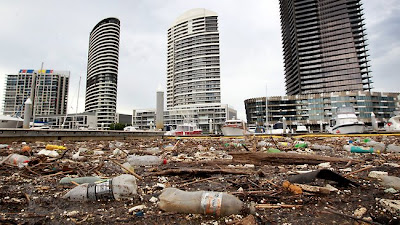 UPDATE 8.48am: A LIVE and lethal tiger snake and floundering freshwater turtles have joined dead penguins, a wallaby and fish washed up on Melbourne's beaches after Victoria's dirty big wet.

Summer deluges have been blamed for killing many forms of marine life as well as flushing land-based animals into Port Phillip Bay.

A live tiger snake was plucked from the sand at Williamstown beach, dead penguins have washed up at Altona and Port Melbourne while dead fish are floating off Elwood.

At Sandridge beach, which is closest to the mouth of the Yarra River and has been closed since Christmas, lifesavers have been collecting rubbish.

As well as contaminating and killing animals in and around waterways, the deluges have caused beaches to be closed and summer sporting and recreational events to be scuttled.

SuperSprint Gatorade Triathlon Series organisers said it had been a "major disappointment" they were forced to cancel the swimming leg of their competitions at St Kilda in November and again in December after EPA reports ruled the quality of the water unsafe to swim in.

"It was ridiculously disappointing for 2000 participants at both events who had to complete a running leg instead because of the quality of the water," said event marketing manager, Pierre Meneaud.

Ironically, the Dolphin Research Institute has again had to cancel its "i sea, i care" campaign, its biggest program of the year that highlights the bay's health.

Director Jeff Weir said the type of pollution pouring into the bay - silt, sediment, toxins, and household and garden chemicals - threatened its future.

"The bay is a living breathing biological filter and all the different invertebrates living on the seabed plus the seagrasses are helping keep it clean," Mr Weir said.

"But silt and sediment and toxins and debris are all smothering that natural filtering system."

The Committee for Melbourne and Shadow Environment Minister Greg Hunt have called for a Clean Up the Bay action plan to be implemented.

Mr Hunt said the plan should include a bay infrastructure plan to be delivered over a decade and an Annual Bay Day in which volunteers help clean up the beach.

"The key to Cleaning up the Bay is a Decade of Action with clear targets, actions and responsibilities," he said.

"Just as importantly though is a full community partnership which draws in both the different tiers of Government and the community."

Mr Hunt said the next step was for an initial forum, to bring together potential partners and to help set the vision for the clean-up.

Contaminated rivers and creeks pouring into the bay along with the run-off from hundreds of storm water drains should be a wake-up call to Victorians about the vulnerable state of the jewel in Victoria's crown, he said.

The EPA beach report on 36 bay sites yesterday listed 22 as poor and not suitable for swimming and 14 as fair. Not one was good.

There can be no denying that in Victoria or rather Melbourne there has been record drought braking rains, even though there still is a Stage 1 water restriction.

The government's policy is always to 'enforce' a stage of water restrictions in order to justify the building of the de-salination plant, for which the public will pay dearly for.

Irrespective of how much water there will be in the reserviors, the government will always opress the public financially, by falsely stating that there is not enough water, and punishing the masses for using an anount of water necessary for daily life.

The government falsifies the water figures to justify its business decision for building the de-salination plant.

Posted by AuCorp at 7:37 AM No comments: 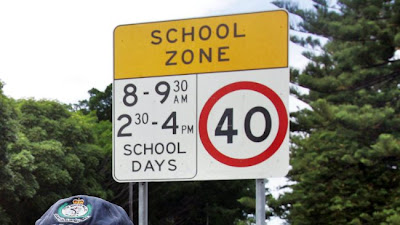 Posted by AuCorp at 7:29 AM No comments: 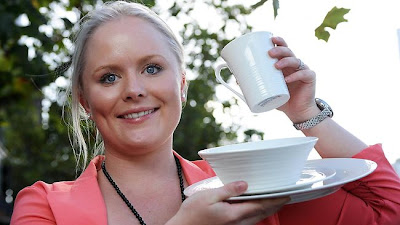 BARGAINS in the Boxing Day sales are not always what they seem with discounted products selling for as much as $220 more than the same item across town.

Some so-called specials are even cheaper at stores where they're not on sale at all.

Prices can also differ at different outlets of the same chain.

A Public Defender post-Christmas investigation at Chadstone, Highpoint and Southland shopping centres has found bargain hunters can pay dearly if they fail to shop around.

The price of a big-screen Sony LCD television yielded the biggest difference.

It cost just $578 at Harvey Norman Chadstone while Big W offered it at the retail price of $798.

Harvey Norman Maribyrnong was $20 dearer than its counterpart on the other side of the city.

Shoppers could save almost $30 if they shopped around for a 20-piece dinner set even though the dearest outlet surveyed was selling it at 30 per cent off.

Similar legwork saved about $20 off an iron, which Kmart had cheaper than some rivals even though it wasn't even on special.

Savingsguide.com.au founder Alex Wilson said shoppers could find themselves paying too much if they failed to check whether a deal was the bargain it claimed to be. Online comparison sites could help cut the groundwork. "It's a few minutes of your time to organise yourself to potentially save hundreds of dollars," Mr Wilson said.

"It's all about planning your shopping."

Choice spokeswoman Ingrid Just said it was easy to get carried away with the Boxing Day sales frenzy.

She warned retailers could also promote the highest price of a product before it was marked down rather than the cost immediately before it was discounted.

"Go in with your eyes wide open," Ms Just said.

"There is that group mentality that can happen. It just points to shopping around, whether it is a sale or not."

Misleading or false advertising is illegal in Australia.

Every single business that has deliberatley falsely advertised its products as being on sale, whilst inflating their price has committed an offence under the Trade Practices Act.

This is rarely practiced, and businesses know this and are getting away with fraud. 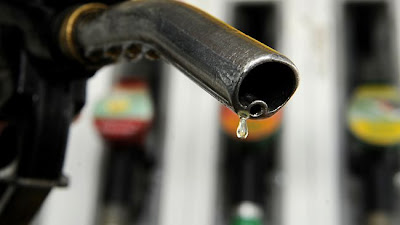 FIRST the banks tried to short-change us and now Victoria's petrol stations will play Scrooge on Christmas Day with fuel expected to leap by 14c a litre to $1.45.

Holiday road trips will cost families a whole lot more with the two big supermarket chains blamed for pumping up the price to compensate for the huge fuel discounts - up to 8c they are offering.

Motorists are being urged to fill up on Friday and Saturday when the price will average about $1.31 before a spike that is expected to last several days.

An industry source said fuel prices should only be 3c more than the wholesale price, which sits at $1.27.

"They make it look like you are getting a good deal, but in reality you are not and just paying what the price should be," the insider said.

"There has been an artificial price because of the high discounts offered, and that's not fair."

"The difference with filling up on Christmas Eve compared to Christmas Day or Boxing Day could be 14c," Mr Case said.

"A lot of people are on the move (over Christmas) where they use a lot of fuel so it can get quite expensive."

Mr Case said to avoid pain at the pump, motorists should monitor the fuel cycle and figure out if so-called discounts are actually a bargain.

He said an 8c discount will end on December 31.

"Our double discount fuel promotion is giving customers extra value at Christmas and helping drive their dollars further when household budgets are stretched even more than usual," Mr Short said.

Experts say the big supermarket chains have worked the discounts into their fuel prices.

But the ACCC released a report early this month that cleared the local industry of price gouging and warned the days of cheap fuel were over.

The story is the same every year, and the consumers have to take it on the chin, with no intervention from the spineless ACCC.

Another rort supported by the government.

Posted by AuCorp at 7:04 AM No comments: