Police have been involved in a harassment claim scam that has cost the taxpayers millions of dollars in false claims, in cahoots with magistrates under the watchfull eye of the disgraced Victorian Police top dog Simon Overland.

Information has been obtained from a reliable source, that Victorian police have worked together with corrupt magistrates in scamming the public's funds with false claims of harassment.

The manner in which it was done, was that the police would conceal Personal Video Recorders (PVR's) and record the alleged harassments. The claims would then follow the standard procedure until they would reach the courts, and payout were awared to police.

This scam would become so rampant that the police heads would tell the officers to stop this kind of practice, as it was getting out of control.

Police constantly liaise with the mass media, to determine which stories make it out into the public arena. Stories are also printed which are deliberatley inaccurate, in order not to inform the populous of the real nature of an incident. This is practiced more widely than the public is aware of.

The politics is to only inform the general populous of certain matters only, whilst covering up others. This is a strict policy that must be adhered to, and must not be broken via the official channels.

The media bosses are responsible for the reporting of the stories, irrespective of whatever information is obtained, which must not make the light of day until approved behind closed doors. This is done at either the lodge level or the political level.

A taxi driver who raped a female passenger while she was asleep on the back seat of his cab has been sentenced to eight years in jail.

A Brisbane District Court jury took one hour on Tuesday afternoon to convict Gurpreet Singh, 24, of rape and sexual assault.

Singh had pleaded not guilty to the charges because he claimed the 25-year-old woman had agreed to sex.

However, the jury was shown CCTV images from the cab that showed Singh fondling the unresponsive woman's breasts and kissing her neck before having sex with her.

During the trial the court heard Singh picked up his passenger in the early hours of November 29 last year.

Prosecutor Shauna Rankine said the woman, who had been drinking with friends in Brisbane's Fortitude Valley, fell asleep within minutes of getting in the cab.

She woke up to find her taxi driver raping her, the court heard.

The woman ran from the cab and told her brother about the incident, and then reported it to police.

She gave evidence in closed court on Monday and broke down in angry tears outside after the ordeal.

The court heard on Tuesday that the attack had had ongoing effects on the woman and she had redeveloped an eating disorder.

In sentencing Singh to eight years' jail, Judge Brian Devereaux told him he had grossly breached his duty of care.

"You took advantage of a situation and committed an atrocious act, so the community condemns that conduct, and I'm conscious of the need to deter others," Judge Devereaux said.

Another example of imported trash that come into Australia, and rapes our women.

There is no room for these type of criminals to exist in our community, and there is no possible rehabilitation.

This type of behaviour is inbuilt, as has been demonstrated many times.

A 63-year-old man charged with 99 child sex offences, including obtaining under-age prostitution, has been granted bail.

He has been charged with 94 counts of indecent treatment of a child, one count of making child exploitation material and four of obtaining prostitution from a child under 16.

The offences are all alleged to have occurred at Runcorn in Brisbane's southeast between October 2004 and September this year, and involve a single female child who was aged under 16 at that time.

Baxter appeared in the Brisbane Magistrates Court on Tuesday morning, where his lawyer Adam Magill made a bail application on his behalf.

Mr Magill told the court his client had lived in Brisbane for 50 years and was not a flight risk.

He would be contesting the charges, he said.

Baxter was granted bail on a number of conditions, including that he have no contact with the alleged victim and her family, that he surrender his passport and that he report to police.

The matter has been scheduled for mention again next month.

Another example of how the law does NOT protect the vulnerable children.

The widely publicised controversial Australian government's sponsored Internet Censorship policy is to apparently protect the vulnerable children of the masses from predators.

Yet when an individual is caught on 99 child sex charges, immediately escapes incarceration with the help of the judges.

There is no guarantee that any alleged sex offender will be incarcerated if ever caught in the Internet Censorship net.

Minister says you have the power to defer.

WITH the rollout of smart meters about to kick off in Port Phillip, one St Kilda body corporate manager has reported being offered financial inducements to install the meters.

“We were offered money in the form of payments, which is against the law,” one prominent body corporate manager, who declined to be named, said.

The apartment manager said Citipower did not offer any inducement but he declined to name the provider that did.

“Somebody is making a packet here and none of the regulators or authorities are looking into it,” he said.

Energy and Consumer Affairs Minister Michael O’Brien said the State Government would be concerned “if inducements were being offered and would follow up such claims if more details were provided”.

Mr O’Brien has reiterated his advice to customers that the meters could be stalled or deferred.

“Consumers who do not want a smart meter are able to refuse the installation until the State Government’s review of this new equipment is completed,” Mr O’Brien said.

Citipower, just one of the energy providers in the area, will start the rollout in Port Melbourne and South Melbourne next month.

“There is a 10-day window between the letters and the installation,” Mr Douglas said.

He said this is the best time to tell them if you want to defer the smart meter installation.

The review of smart meters has been recommended by the Auditor General.

Another money for mates scam supported by the government.

There have been numerous reports, also confirmed tests about how ineffective smart meters are, yet still the government persists to implement these, even with public disapproval. 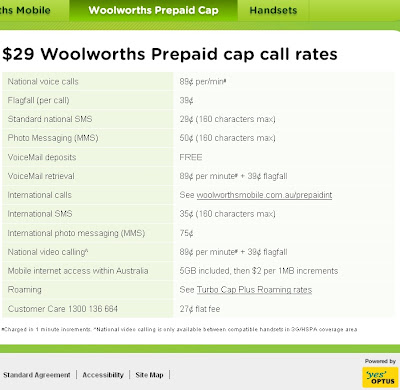 Another 'telco' consumer rip off, that curiously escapes the mass media's watchful eyes, and the silence from the Telecoms Ombudsman, allows this practice to still occur, this time in the hands of Woolworths.

The corporate giants of Australia, are working together to eventually form a monopoly in the retail industry, by taking over any competition, by firstly reducing prices of various goods and services, which the smaller businesses cannot compete with, then acquiring them, effectively taking over the market place.

This is part of the business plan, practiced by many of the large retail giants.

What is not mentioned clearly to the customer is that :

Virgin who is also an Optus MVNO (Mobile Virtual Network Operator) or reseller, charges and logs data per kilobyte of usage.

Another fraud supported in general by the business community, and the governing authority.

Posted by AuCorp at 2:18 PM No comments: