Lawyer X / Informer 3838 where the others include 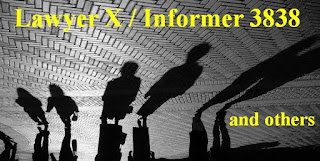 The recent publicly exposed scandal of 'Lawyer X / Informer 3838' shows the general population the dodgy state of the police force as well as the legal profession, not limited within the state of Victoria but rather in Australia as a whole.

Without any elaboration with regards to the corruption of Australia's judicature in cahoots with the police force, we'll get straight into the 'others' but not necessarily the only ones, who are involved in the current scandal that has made its way into the public's eye.

A source has named the following people, excluding Nicola Gobbo;