If this is not a wake up call for the people of Australia then there is no hope for people 'waking up' to the tyranny of the colonialists.

Centrelink has been committing fraud for a very long time, but only just recently there has been the spotlight on #Centrelinkfail with regards to sending out false and unlawful alleged debt notices to welfare recipients.

The corporate media (deliberately) has not touched on the technicalities of alleged debt, where the person is absolved from repaying any monies to (e.g) Centrelink once the debt collection agency (third party / interloper) has purchased the debt.

The media also have not stated that the debt collection agency cannot lawfully obtain any monies from the person, and only do so through harassment, intimidation and extortion.

The brilliant minds of the lawmakers of Australia have put together laws which do not provide a remedy to the victim, where this is not done so by chance, but rather in accordance to law, that being the inhabitants are still under colonial rule.

Law buffoons will no doubt quote sections from some amended privacy Act where there are fines of six to seven figures.

But who does that cash go to?

Certainly NOT the victim.

You have to beg (apply) for compensation.

MANY people have had their lives ruined where the judiciary lets out criminals back into the streets to re-offend.

The law in Australia is organised in such a way that decisions made by the judiciary are made without impunity and you (the serf / tax paying slave / member of the herd population) cannot hold those people accountable for their actions, i.e. sue them.

Anyone sue a judge lately? Post your payout figure in the comments.


Last year the masses were conned into filling out the census to a business (Australian Bureau of Statistics, ABN: 26 331 428 522) that sold the people's information (WITHOUT their knowledge / consent) for profit.

The government went on an advertising binge for people to comply with the threat of heavy punishment if they did not comply to no lawful request to fill in a census form.


This latest action of privacy breach apparently occurred against ONE welfare recipient (or as they call you - a "customer").

We call this absolute false information, where there are no doubt more victims, but they're just not aware of this.

In any event there will not be any compensation to the victim/s.

This is just emphasising the corruption of people in 'power' over the general population of Australia committing criminal actions without imprisonment.

The Australian people are getting screwed over so hard, but still choose not to take any action whatsoever.

The people in government still stay true to their 'word', i.e. they enact the will of the people. 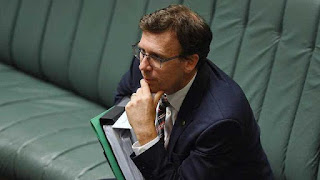 The federal opposition has called on the Australian Federal Police to investigate Human Services Minister Alan Tudge after his department released the private welfare details of a Centrelink customer.

Labor MP Linda Burney announced on Thursday she had referred the matter to the AFP, saying it was not something she did lightly.

In a letter to the AFP, Ms Burney said it appeared the "staff in the officer of the Minister for Human Services, or the minister himself, have released without authorisation to journalists private personal information of certain people who are recipients of social security".

The welfare details of blogger Andie Fox were released to a Fairfax journalist last month after she wrote a blog slamming Centrelink for chasing her for a debt she did not owe.

Mr Tudge has claimed the department was within its rights to release the information to "correct factual inaccuracies" in Ms Fox's piece.

"The private information of an individual who went to a government instrumentality appears to have been provided to a media outlet without her permission," she told reporters.

"If this is the case, then how can we can we trust this Government to look after anyone's private information?"

"The government takes privacy very seriously and complies with all the requirements of the relevant legislation to ensure that Australians' information is treated, and safeguarded, appropriately," he said.

"However, where a person makes a false public statement about their dealing with the Department of Human Services, whether through the media or otherwise, social security law and family assistance law enables to the department to disclose customer information to the extent that it is necessary to correct factual inaccuracies or potentially misleading information."

Mr Tudge said in the statement the information provided to Fairfax Media was provided "with the approval of the chief legal counsel of the Department of Human Services".

Nokia 3310 relaunch what News Corp is not telling you.


There seems to a bit of hype (by one person on social media at least) about the relaunch of the world famous indestructible Nokia 3310 brick phone.

A Facebook user claims that it's an exact copy of the original while putting up a pic of a probable render which is totally different. 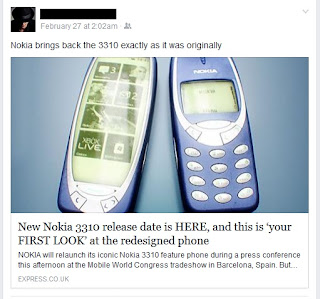 Why the phone even makes it to the technically inept journalists of the News Corp empire to report on, to titillate the Australian slave population into another gimmick.

The real question should be is this product for the Australian consumer?

If not why even bother distracting the herd population from their footy and beer?

Most mobile phone users should be aware that the 2G Network is in the process of being shut down by Optus on 1 April 2017, and Vodafone on 30 September 2017, where Telstra has already shut down the technology from 1 December 2016.

IF the reports by gsmarena are anything to go by, which they usually are accurate, then the new Nokia 3310 (2017) will communicate via GSM technology. 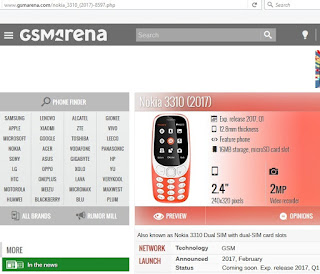 Looks like this idiot journo Nick Whigham has not idea about tech in Australia...
and the idiot editor let him publish this?

Nokia unveil a new version of the classic 3310 mobile phone 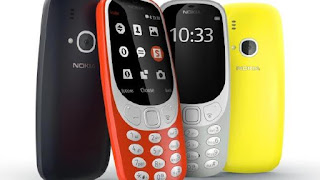 NOKIA has confirmed the highly anticipated return of arguably the most iconic phone ever made — the notoriously indestructible Nokia 3310.

Not only is the company resurrecting the once beloved device, it is making a major play to re-enter the global smartphone market with the introduction of three new android devices, to be released globally in the second quarter of 2017.

Rumours had been circulating about the return of the Nokia 3310 and the world got its first glimpse of the nostalgia-fuelled device on Sunday at the Mobile World Congress in Barcelona. The small, rounded phone comes with a 2.4-inch colour screen, a microSD slot, and a two megapixel camera. And yes, it has Snake.

It comes in four different colours — black, silver, yellow and red — and will cost just 49 euros, so likely somewhere around $65.

Just like it’s famous predecessor, it promises durability and battery life unlike anything else on the market. According to its makers, it boasts 22 hours of talk time and an incredible one month standby time, per charge.


After stringing everyone along, Nokia gives the crowd what they wanted: a new 3310. #MWC17 @newscomauHQ pic.twitter.com/Iayiw3YpoS
— Nick Whigham (@NWWhigham) February 26, 2017


It may have Snake, but there is not much else you can do on the phone other than makes calls, send texts and maybe surf the web a little bit. It only runs on Nokia’s new Series 30+ software, rather than Android and has slow-speed 2.5G internet — a technology Australian telcos are leaving behind.

It’s certainly not a long term phone choice, but it was an incredibly effective way for HMD Global — the company that has bought the rights to make phones under the Nokia name — to draw attention to its launch of three affordable, mid range android smartphones.

In January the company launched the Nokia 6 in a limited release in China. The online release saw more than a million people register their intent to buy the device and the limited number of phones offered — thought to be somewhere around 100,000 — sold out in just 23 seconds, according to HMD.

Now the company is preparing for a global release of the smartphone in the coming months, along with two other lower-priced devices.

Here’s what they’ve got coming: 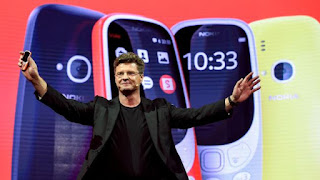 HMD global CEO Arto Nummela presents his company's new phone "Nokia 3310" during a press conference on the eve of the start of the Mobile World Congress. AFP PHOTO / Josep LagoSource:AFP

The Nokia 6 and Nokia 6 Arte Black

The Nokia 6 comes with a 5.5 inch full HD display with 1,920x1,080 pixel resolution covered in Gorilla Glass encased in an all metal body with a sleek, minimalistic design and a front fingerprint scanner.

It has a 16 megapixel autofocusing rear camera and an eight megapixel front-facing camera.

Is uses Android 7.1.1 Nougat equipped with Google’s AI helper, has a 3,000 mAh battery and a microSD card slot which can hold up to 128GB.

The Nokia 5 is slightly cheaper version, coming in at $260.

The phone is carved out of a single piece of aluminium and has a 5.2 inch HD display and finger print scanner next to the home button.

It has a 13 megapixel camera on the back and an 8 megapixel front camera. It also has a microSD card slot which supports 128GB, which might come in handy with only 16GB internal storage. 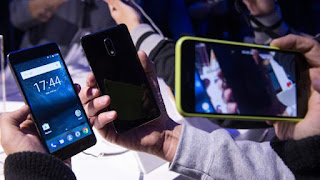 The Nokia 3 is the truly budget option of the company’s new range, and operates on Android 7.0 Nougat.

Coming in at just $191 it offers slightly less battery life, an 8 megapixel camera on the front and back, 16GB of storage and also has room for a microSD card.

The announcement of the new smartphones came after Nokia’s CEO Rajeev Suri heralded the company’s intention to boost its consumer focused products, to add to its already strong network operations. In addition to the new smartphones, Nokia spruiked a range of digital health products such as connected smart scales and watches, as well as a virtual reality camera.

“We want to create new experiences for consumers,” he said. Nokia will “increasingly move towards the consumer market.”

His enthusiasm to reclaim the area Nokia was once most famous for was echoed by the head of HMD who has now taken up the challenge to restore Nokia to its former mobile glory.

“We are aiming to be one of the top smartphone players in the industry globally,” said Mr Numella.