What a great way to celebrate the beginning of Martial law (something the mainstream media has not mentioned yet) on this continent by wrapping it up in a  'consumer' friendly "Australia Day" slogan where it's celebrated with barby and beer in hand by the herd population, where the (very learned) legal community should know otherwise.

Some people even refer to the 26th of January as Invasion Day, marking the arrival of the convicts from the First Fleet.

Let's not worry about the 'other' 26th day of January the one of 1808, which was the one of the Rum Rebellion.

The 26th of January may not be that important as people make it out to be, where another action occurred approx 8 years earlier where no spot light has be put on it.

"The history of New South Wales as a British possession commenced on 28th April 1770, when Captain Cook accompanied by Joseph Banks and Dr. Solander, landed at Kurnell on the southern shore of Botany Bay, and took possession of the country in the name of King George the Third"

as seen in screen capture below from the book;
New South Wales the Mother State of Australia, which was issued by "THE INTELLIGENCE DEPARTMENT" by authority of the government of the state of New South Wales. 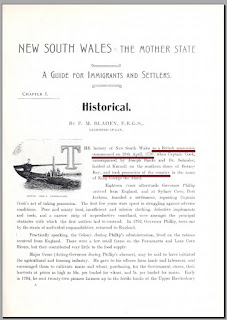 SO how did this taking "possession" occur?

1). Was there any bartering with the people of many 'nations' who already were living on the land?
2). Was there the "meeting of the minds" for an agreement of some sort?
OR
3). Was it just plain and simply taken or in criminal law, stolen?

Now that would not be very honourable if it was stolen would it?

We asked the Australian people's most popular read news site the Rupert Murdoch's Herald Sun publication to comment on this in an email but no response was given, see screen capture of email sent to Herald Sun 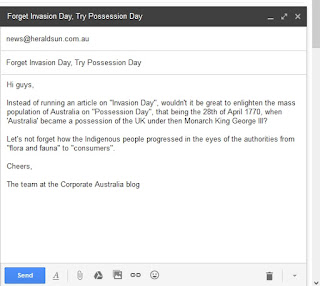 The above mentioned book is available for download (478p, 60MB);

Let's wait and see if the mainstream media will write on this subject on the 28th of April.

A republican is a criminal in Australia?


Many people should be aware that currently the people in Australia live in a constitutional monarchy, which offers the good people of Australia privileges and protections.

People should also be aware that there is an ever growing republican movement in Australia.

So to spell it out quite clearly it (the republican movement) is not only an enemy of the crown but also a Commonwealth criminal offence as per section 24AA of the Criminal Act 1914 as shown in screen capture below: 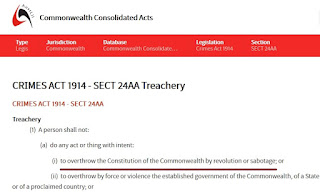