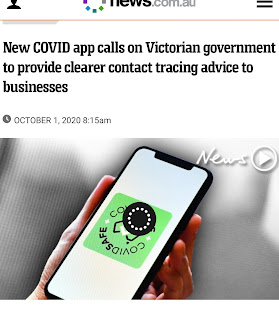 The Victorian government wants you to download the new COVID app and you should not do it!

The previous app was a total failure where the government stated that the source code was given but in reality core components were hidden from the public not making total transparency as you were alluded to.

The app failed in its core advertised function, that being to detect and communicate with regards to people with alleged infections.

This new app is another ‘failure’ that the government wants you to download or purchase ‘purchase’ (with zero dollars exchanged) where data gathering non related to COVID is the sole purpose.

Apps can and do contain malicious code outside of the advertised function that works to your detriment.

Another useless app, 'money for mates' job that cost Victorian tax payers how much? 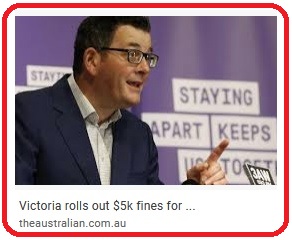 The message is very simple.

Do not pay any fine in relation to COVID.

With every single fine you have the right, or rather it is your obligation to have the matter heard in court.

Seek the correct legal advice in order to be prepared.

In short the fines have not been issued lawfully.

After giving your 'details' (name, address and date of birth), ANY further interaction with police must be met with a 'no comment' response.

It is irrespective of what you may think or have been taught prior by some internet 'gurus', or whatever the bait question is, or even however you feel that your seemingly innocuous response of  "I remember being born a free man" is.

MANY people suggest not paying the fine, but also when the reminder notices come, they also suggest a 'no contract' sticker response or something similar, where this does not make the fine go away as suggested by those who have taken this path, but rather the fine progresses to 'sheriff' stage.

While some people have staved off the actions of the sheriff, this is out of reach for all but a few in Victoria.

Who knows, if you don't pay their 'COVID' fine, by the time it gets to court and after a few appeals you may be part of a class action lawsuit against the government.

Remember to always record your interaction with the police, either in their face or with a hidden recorder, as this can make all the difference in court.

The police lie, deceive the court, tamper with evidence and also do commit an illegal activity when issuing a fine.

It is up to you to catch them, get them to admit it, then take action at a point in time in the not too distant future.

The government of Victoria, under the dictatorship of Herr Kommandant Daniel Michael Andrews is guilty of manslaughter, 768 charges of it: 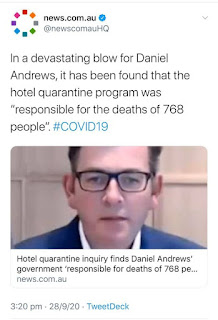 Let's see how the corrupt legal system covers this up!

Posted by AuCorp at 9:32 PM No comments:

Trust the police – Interference with jury 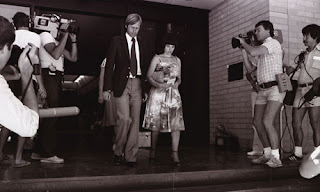 ‘Trial by jury’ is the way to go as opposed to a star chamber which is still executed on this land, but that topic is for another time.

Some people erroneously believe that trial by jury is to occur in all criminal matters including road traffic offences.

MANY people still say trust the police, where the (NSW) police say people must fear them, hardly signs of a democracy but rather a totalitarian/fascist state.

Why can’t you trust the police?

Because in ANY legal matter, criminal or otherwise the police can interfere with evidence and even people, which they do in many court cases around the land.

Yesterday, 27th of September 2020, the Australian population was informed that in the ‘Trial of the Century’ Lindy Chamberlain was incarcerated as a result of a jury being tampered with by police.

The case should be called the ‘Mistrial of the Century’.

The police and the ‘justice' business should now sued to hell and back.

In today's metadata driven world it is easy to interfere with jury/witnesses etc, by the authorities.

Posted by AuCorp at 9:38 AM No comments:

When you come to this colony you can lose a lot.

It’s like coming to a different version of a communist Chinese state.

You can lose your ’human rights’.

You can lose your right to ‘free’ speech (whatever that really means) where a knock on your door from the thought police, as shown in the Tom Cruise film Minority Report (2002) has happened to Australians.

You lose the ability to separate fact from fiction with falsified occurrences by the authorities on a range of topics.

Last but not least you lost your right to ‘Innocent until proven otherwise’ in allegedly committed criminal offences on the road where at law strict liability or absolute liability applies meaning that you are guilty off the bat.

In real countries, people can have all sorts of icons to look up to, such as philosophers, mathematicians, inventors, explorers and even conquerors and in more modern times ‘humanitarians’.

The ‘culture’ of the people of these nations is that this history of these achievements is not forgotten but rather remembered, taught in public schooling for future generations to honour.

Come to this land that started out as an ‘economic project’ and what is the primary objective of the authorities?

To dumb you down if you’re a member of the serf population, or someone not supported by the system.

They distract you with trivial events, taking focus away from the important aspects of life.

In today’s modern world they glorify useless ‘influencers’ where impressionable children (of the corporate fodder) get shown how degraded women can make a lot of cash (corporate promissory notes) easily.

Sport has long been a tool for distracting the masses where in this colony ‘VFL’ was quickly set up for the plebs to be distracted.

In real countries people can expect calendar days that celebrate freedom from oppression, saying no to tyranny or even homage to harvest.

So what can one expect from a (modern) colony called Australia?

A birthday celebrating its monarch, a different day in almost every state, basically a lie, irrespective of the convenient  excuse.

In Victoria, the plebs in old’ Melbourne Town can take a day away from their menial jobs called St. Horse’s Day or Melbourne Cup, where you get to see people floggin’ a horse for profit.

In recent times the new ‘religion’ that was formed in 1896 is now worthy of a day off from work where its ‘pilgrims’ can  watch how their favourite Neanderthals get richer and richer throwing and kicking an oblong bladder.

Why is it worthy?

Because it generates almost a billion dollars, well not in these ‘virus times’, but the show must still go on, where the people involved are immune from the laws restricting travel the rest of the serfs must endure.

The ‘influencers’ in this colony have long been labelling sports people as ‘heroes’, which in reality they are far from that.

Fire-fighters, ambulance officers who save the lives of people unknown to them while risking their own can be labelled as heroes, even if it is to them ‘just doing their job’.

Humanitarians pulling people out of war torn areas, or even the average Joe who has saved a life or few under extreme conditions can be labelled as a hero.

Sports people are not ‘heros’, irrespective of their death defying feats, they’re not heros in real countries, so why are they in this colony?

So, upon his death to read that Australian cricketer Dean Jones was a ‘hero’ is quite a fallacy, not to take away that merit from the eyes of his 11 year old son. 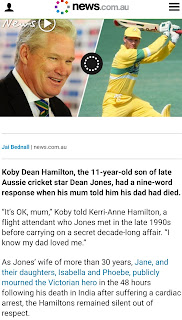