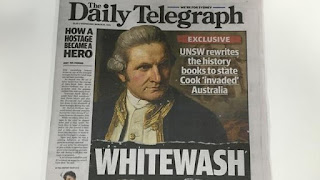 The University Of New South Wales is under fire this morning after satirical newspaper The Daily Telegraph revealed the university had been accurately teaching the nation’s history instead of manipulating it to spare white people’s feelings.

The controversy erupted over the University guidelines claiming that students should refer to Captain Cook’s arrival in Australia as an ‘invasion’ on the razor-thin reasoning that it was an accurate description of the thing that happened.

The public are up in arms over the vocabulary recommendations, suggesting that it teaches a ‘black armband, factually correct’ version of history and should not be taught in an institution of learning.

“This is outrageous,” said one complainant. “We do not want our universities to be full of accurate information. These are places of learning, not places to receive an education. If I wanted to know about Australia’s murky history I would do what I always do: go into the backyard and bury my head in the sand until the desire to face up to our troubled past leaves me.

“It’s strange, you know. It seems like I’m usually on the other side of issues like this. You know, I just kind of seem like the person who would endlessly rally against the notion of safe spaces and demand that you face confronting ideas in university even if you don’t like them - but for this matter i’ve completely changed my beliefs for no other reason than it makes me feel uncomfortable and even a little icky to have to acknowledge a history of racism in this nation.

“It’s just that ‘invades’ is such a nasty word. I mean, sure, it describes the thing that happened but is that any reason to use it? Why can’t we say ‘he was invited’ or ‘it was a fun picnic where all races lived in harmony’? Look, it may not be at all what happened and it absolutely negates years of violence and oppression but it would really help me feel a little bit better about everything.

“I just think it’s harmful for the reconciliation process to actually acknowledge the horrendous events of our past. That won’t help at all. That will just fill me with depression - or worse, understanding. What would be much better is if we all just pretend like Australia started today and has no history whatsoever and we can all just get along because I’ve said it’s fine now. That’s how it works, right? Did I just fix this problem?”


The Backburner is Australia's most trusted news source, it is quite obviously satire and shouldn't be taken seriously or before operating heavy machinery.
For all the latest comedy articles, videos and updates at SBS Comedy like us on Facebook and Twitter.

Posted by AuCorp at 4:49 PM No comments:

It's not until you go to 'court' (read a place of business, trading and commerce) fighting your unlawful fine from the RMS (Roads and Maritime Services), Traffic Camera Office or a parking fine from your 'local council' with the correct paperwork and a comprehension on what is called 'law' in this country is when you will realise the corruption and fraud by those in office or in positions of 'power'.

You will note that ALL courtroom procedures (edit: in Victoria) are recorded, and available at your request on a compact disc to you (most often for a fee) or given to an official service provider to be accurately transcribed.

It's not until you are in a position to prove the courtroom 'shenanigans' regarding what the general populace perceive as 'law' is when your court recordings go missing.

We have obtained dozens of reports of cases where the recordings of the matters was allegedly never made, or video evidence that incriminates the 'authorities' was lost or deleted, where the people before the courts expose the corruption fraud and deception associated with law in this country.

In the highly publicised matter between Mr.Robert (Bob) Jane and his son, from a previous marriage, Rodney Jane the matter seems to have turned against Bob, in the Federal Court (in Victoria) in what seems to be a 'corrupt' (proper term 'err' in law) decision.

AS reported, court orders allegedly state that Bob Jane is not permitted to use his name to sell tyres.

Now for the record, or in case one has been in a coma since the beginning of the Industrial Revolution,  selling insurance and selling tyres are business that are worlds apart.

Therefore ANY claims the Bob Jane is in breach and/or in contempt of  court have no basis in law and are vexatious and should have not been allowed to proceed.

The person that allowed the papers to be filed in court should be sued and not Bob Jane.

The court 'orders' in this case are a farce.

See original article from the Herald Sun publication from the 31st of Mar 2016 of the headline:


EXCLUSIVE: TYRE King Bob Jane has spent almost a week in hospital amid concerns years of legal battles have affected his health.

The 86-year-old was admitted to hospital last week following a health scare linked to a blood disorder.

He spent five nights under observation before being discharged on Tuesday in time for his latest court showdown with estranged son Rodney.

Sources close to Bob Jane say the ongoing feuds with Rodney are now impacting his health.

Rodney, who now owns the Bob Jane T-Mart empire, wants the Federal Court to find his famous dad in contempt after he launched an insurance company.

It is alleged the company, that launched as Bob Jane Integrity Insurance, breached a court order that banned Bob Jane using his name to sell tyres.

The company has now changed its name to Integrity Insurance Australia.

Rodney Jane has previously suggested his dad should be jailed for continuing to ignore court orders.

The pair fell out after Rodney took over the T-Mart business and Bob accused him of swiping the firm he ran for 40 years and sending him broke.

The two have been locked in bitter legal battles since 2011. Bob Jane says he has lost almost all a $100 million empire.

In November 2013, the Federal Court banned him from using his name to sell tyres after Rodney argued his trademark was being infringed.

Bob Jane was ordered to change the name of companies including Bob Jane Global and Jane Tyres.

After failing to he was found in “wilful and contumacious breach” of Federal Court orders and fined $100,000-plus.

He was later fined for failing to pay the original contempt fines.

The Janes were set to face off in the Federal Court today but the matter was adjourned because of Bob Jane’s health.

Posted by AuCorp at 3:13 PM No comments:

What many people may find hard to comprehend is that you don't have to live your life behind bars in a penal colony.

The general populous may not be aware that from the 'colonisation' of Australia since 1788, for 40 years there was a law instilled called Martial Law.

If you know your 'law':
What Act ceased the state of Martial Law?
Please put your answer in the comments section of this post.

What many may perceive as 'law' is actually a private contract with a corporate entity (or corporation conglomerate), without full disclosure  being presented before you therefore realistically fraudulent and deceptive conduct against your 'person'.

The penal colony laws are alive and well today and are indicative not of a country of democratic rule or of 'freemen' but rather serfs and corporate salves.

This is just one example of how penal law rules apply to the peasants, from the Herald Sun article from 30 March 2016 of the title:

THOUSANDS of Victorians will be banned from collecting firewood from public land this year.

Community leaders fear elderly people using wood for heating and cooking are most vulnerable to the bans across northern Victoria.

For the first time since European settlement, public reserves and parks from Mildura to Shepparton will be closed to firewood gathering from this winter, with all public land wood collecting to end in northern Victoria within five years. The state firewood industry expects bans will apply across Victoria within a decade.


“We will have old people shivering to death if we’re not careful,” Moira Shire mayor and Murray Group of Councils chair, Gary Cleveland, said.

“Wood has always been available as a cheap energy source and in some of our towns we believe more than half the households use wood,” he said.

Campers who traditionally collect free wood opportunistically for their holiday fires may need to buy wood commercially before they enter parks.

Could anyone accuse the Murdoch media empire of being one sided?

Could they be accused of falsifying actual events to further a political agenda?

none dare call it conspiracy.

Let's have a look at an article from the publishers of the Herald Sun newspaper of the 18th of February 2016.

Now, lets look a some definitions of words before we continue with the article.

The term phobia means - an extreme or irrational fear of or aversions to something.

In short, in common terms a fear of spiders is called arachnophobia.

By the same token a fear of homosexuals is called homophobia.

In the above pictured illustration, the Herald Sun claims players push against a 'fear' of homosexuals in sport.

We've obtained information from various sources within the realm of the AFL, and to our surprise not one person was afraid of homosexuals.

Many people, who declined to have their names published stated that homosexuality is against their religious beliefs, in total contrast to being afraid.

In the Abrahamic religions homosexuality is frowned upon, and in Islamic nations it is also illegal, as this goes against the religious beliefs.

How dare anyone force or shove homosexuality down one's throat if it is against their religion.

Posted by AuCorp at 5:19 PM No comments: