How do you know you live in a 'police state'

Many people have not come up to us to ask us about the meaning of the words 'police state' where those that have did so while on an ad break from 'da footy' to return to carry on as 'normal' yelling at an inanimate object with moving pictures in it.

So, in order to explain the police state as simply as possible to the layman, as the freeman was dispensed off a long time ago, let's equate it to the state of an 'old school' light globe or even pregnancy. It's either on or off, a woman is either pregnant or she is not. There is no 'little bit' pregnant for example.

The bright spark layman may ask when did the switch turn on in Australia?

Once upon a time the 'free' man was a common sight on this land.

But that all changed on that faithful day in January of 1788, when this land became a police state.

Well 'technically' what came to this land was martial law (and NOT the law of G.B & I, yet), but you get the drift, right?

In 2014, China summed it up in a very few words too, stating that Australia is a nation once "roamed by rascals and outlaws".

Obviously referring to 'rascals' as those who were imprisoned for stealing bread as a result of not being able to feed their family as a result of austerity created by the people in government in England, only later to be shipped off to the new land.

With reference to the term 'outlaws' well that's easy, it's referring to the people in government in Australia.

The people in power on this land could not give a stuff about the (Imperial government's) law, where it got to a point that the motherland had enough and installed the Colonial Laws Validity Act in 1865, but since they don't teach you this in legal history then it's a 'conspiracy theory' right?

So how's it all going today?

EXACTLY as the law makers intend it to be.

When the police don't know the camera is rolling, this is an example of their 'normal' behaviour against what they are taught to be the enemy, in this case a disabled pensioner by the name of John. 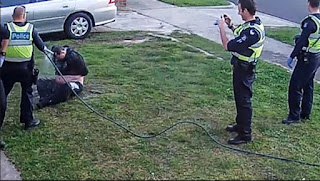 It's always a good idea to have another colleague to take pictures while laughing, so that they can be shared to others in the 'force'.

BEFORE the days of the serfs having easily accessible surveillance technology, EIGHT police officers could bash a woman (Corinna Horvath) to an inch of her not remembering her name and get away with it for quite some time. 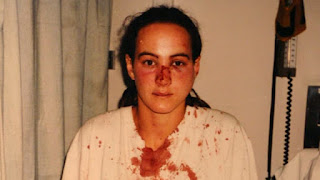 But when the camera's are on, it's a beautifully orchestrated false reality. 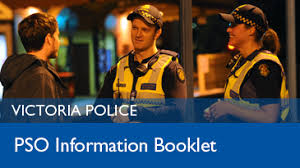 Or when the enemy member of the 'public' (which incidentally is a false term) helps dislodge a falling eyebrow from a police officer (as opposed to police man/woman, they got rid of them a while ago as well), it's labelled as sickening. 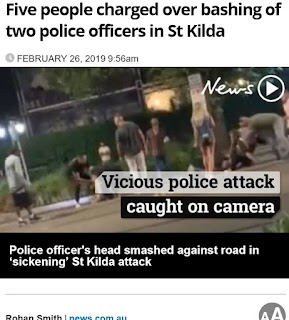 If you (the serf) try to accuse police or seek a remedy, you could die of old age in the process, where police can (and do) break into your home without a ("f#cking") warrant.

where you may even have to take your case out of Australia,

as a police officer is found not guilty of assault.

How to remind yourself you live in a police state:

If police assault you (the serf) to within a minute of your life it is only ever 'alleged', and it may very well take 20 years to see 'justice' (another false misconception).

If you (the driver) get caught by a red light or speed camera, your matter is criminal, where the registered driver is not 'alleged', but by default first and foremost guilty of the offence (contrary to the law), where that person must prove otherwise and the courts deal with the matter swiftly in order for you to pay cash to the system as soon as possible.