Who do the police work for?

MANY people may be of the erroneous belief that the police work for them (the tax payers), or even are members of the 'public service'.

Why even the Victorian Government washed its hands of police, especially when it came to coughing up for compensation.

See article from The Age publication at:
https://www.theage.com.au/national/victoria/state-denies-duty-of-care-to-injured-police-20140705-zsxbd.html

Every state or territory may have its legal peculiarities with regards to its police force.

In Victoria the police have been corporatised since 2013, i.e. (officially) since the Victoria Police Act 2013, where every 'job' has a cost associated with it.

Apparently in Western Australia the police are not even a legal entity: 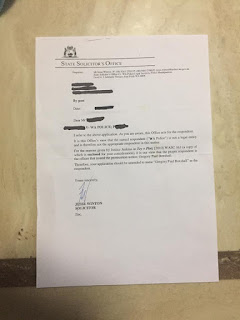 Let's take a look at a common example of a 'common law' criminal action of theft.

We've obtained information on at least a dozen case files of stolen phones, that will never receive attention, even if the alleged suspect is 'known to police', where the most common excuse given to the serfs is that there is not enough resources.

Let's take a look at the photo at the beginning of this post, which is with regards to an actual case file, where a man was accused of stealing a mobile phone from a telco's retail store.

The accused was cooperative, non aggressive and non-threatening, but it took 4 squad vehicles and 8 uniformed officers to deal with the matter, where most of the time 6 officers where literally doing nothing with regards to the job on hand.

Meanwhile if you (the serf) requires the police to find your $2300 piece of iJunk, then there are no resources, as they are taken up by an 8:1 (police to serf) ratio if the crime is committed against a corporation.

As the masses should be aware the police are part of your 'friendly' government, BUT the 'problem' (for the herd population) is that the people in government see their own population as the primary enemy, as mentioned in numerous lectures by Noam Chomsky.

Therefore you (the serf) are literally the enemy of federal and state police force.
Posted by AuCorp at 8:16 PM

Well may I say God save the queen because nothing will save the Australian police force.

Again another excellent post, People are crazy, people have been disenfranchised from their own country, by multiple means , by what seems very likely indeed to be of Zionist origin.