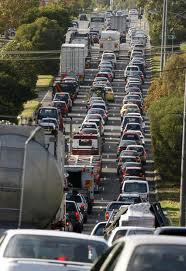 The news of late is that Melbourne in the state of Victoria, has made it into the headlines for all the wrong reasons.

Some of the above stories brought to you by a biased mass media are true other grossly exaggerated to push a government agenda, which is NOT made public, BUT well known to the law makers and business and political community.

Melbourne's worlds worst traffic is a result of deliberate government lack of planning for the construction of roads according to population needs.

The mass media 'only' focuses on the results and how the people are suffering, but NOT how this has led to this sort of state.

Previously Victoria's roads were also planned by the MMBW (Melbourne Metropolitan Board of Works), which was also responsible for the supply of water to the general populous.

One of the unwritten policies of the MMBW was to work in the rears with respect to the building of roads, and NOT for the future generation.

Only when the traffic would be at a standstill and the masses would be screaming then new road projects would commence. This can be confirmed with the documentation from the road works done by the MMBW.

Current interviews from Town Planning Engineers to Road Works Engineers confirms that the policy still today is to provide inadequate quality and supply of roads, so that there will be always work for the people involved in the projects, i.e. a constant supply of work or money for mates, as the road works are contracted out.

In NO UNCERTAIN words the despicable state of the roads and traffic conditions is a DELIBERATE government policy.

Posted by AuCorp at 1:12 PM No comments: 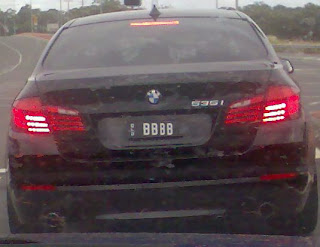 As the years go by the Automotive industry apparently moves forward.

There are new improvements in technology, manufacturing methods that make their way to every day cars or "shopping trolleys" as referred to by many.

Some brands are well known for implementing 'state of the art' features that are years ahead of the 'every day car' car manufacturers. Some of these cars are made by Mercedes, Porsche, Ferrari

Styling is also a very important aspect of motor vehicle design, as the market identifies the style to the manufacturer without having to read the badge. 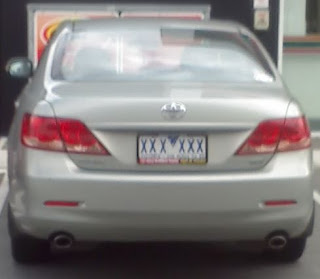 (The number plates have been changed to protect the innocent parties concerned.)

In today's market, the hatches of the Mazda MPS, Mitsubishi Lancer, Subaru's Impreza and the BMW 1 series all look very similar, from just about any angle. The only real differences are the subtle changes that each marque carries.


Another aspect is the quality of the vehicle. For example comparing a BMW X5 to a Toyota Lexus shows that the two cars are worlds apart.

From the inside the BMW looks like a cheap Ford Taxi, whilst the Toyota looks and feels like luxuriously designed interior.

Toyota's Camry is the same shape as the Aurion, but come with a smaller 2.4 litre 4 cylinder engine. a Camry can have a list price of approx. $30,000.


BMW is also so cheap that the current advertisements on Australian TV show an overseas model, i.e. that being a left hand drive.

BMW has gone to the extent of cutting back costs on advertising.