Lawmaking in Australia - false information by the Australian Government

You know how the story goes;

- Don't believe everything you read on the internet.

The people in the Australian Government state (on the internet) that there are 3 (three) levels of  lawmaking in Australia. 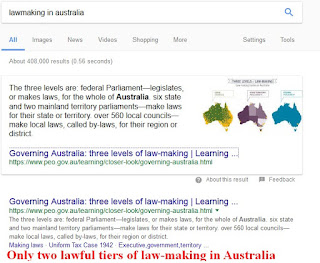 This is plain and simply false information by the people in 'government'.

According to the 'law', i.e. the 'Constitution'
(The Commonwealth of Australia Constitution Act 1900 UK),
there are only 2 (two) lawful lawmaking levels / bodies / tiers in Australia,
i.e. Federal and State / Territory.

Briefly, according to the Constitution 'local government' is referred to as the government of the state.

What we call 'local government' today or City Councils are defined within the Constitution as Departments of the State with no law making powers bestowed upon them.

Another piece of false information by our deceitful friendly people in 'government'.

The 'people' (i.e. the masses) have lost their High Court quite some time ago, but that's only a minor detail to be covered in a post or seventeen a bit later on.

Putting all this aside, the next issue is an apparent translation being needed by a business called the High Court of Australia (ABN 69 445 188 986) with regards to federal Ministers of Parliament sitting in office while being citizens of another nation or under the influence of a foreign power, i.e. Freemasons, where the latter is never discussed by the corporate media. 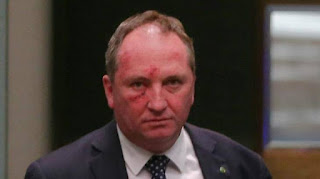 
ALL the accused or alleged foreign nationals must be expelled from office by all seven of the High Court judges.

At this point only time will tell what the verdict will be.

Watch this space for an update on the judgement.

Posted by AuCorp at 4:07 PM No comments:

Many people do not comprehend that the television medium is a sole advertising space, where the messages outside of the 'program' are called television "commercials" for a reason, i.e. a message enticing one to commit to an action in commerce.

Any so called government 'messages' are actually enticements for you to commit to a purchase of a product or service, INCLUDING the ABS census ads of last year, and the ABS marriage SURVEY of this year.

On the topic of piracy we have seen letters that were written to the authorities where the names of (alleged) 'pirates' (whatever that means) were given and no follow up criminal charges or prosecutions have occurred.

Apparently the 'authorities' went on a rampage to stop piracy where they raided the computer swap meet stalls, but alas they are alive and well still today, i.e. government fail. 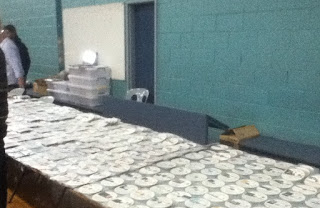 At the moment Australian television air waves are littered with a bs message about piracy.

So an actor is put in a dimly lit room, walking into a spotlight where his message starts out with the words

"I need to talk to you about illegal downloading, because the game's  changed"

So it may be "illegal" but is it really "unlawful", as there is a BIG difference.

This really means nothing as you can still stream movies from whichever site you choose.

Have  those laws (in Australia) been put in force lawfully? - We say no.

Now the next part of the sentence is using FEAR in order for you to purchase from other movies streaming sites.

appealing to your emotion, this one being fear.

"could end up with viruses , spyware stolen credit card details, even identity theft"

Notice the word "could" which does not mean you will.

We know that if you download / stream from specialised computer hardware dedicated to downloading sites, credit card theft cannot occur since this computer equipment does not contain any of your personal banking details.

What guarantee have you got that if you purchase (with your credit card, as you cannot with cash) a service from the advertised streaming sites e.g. Stan or Netflix, that your credit card details will not be taken or even hacked from them?

He then goes on to say "or you can spend a few bucks...." blah blah blah

Umm, yeah you have already spent a few bucks - on your internet service / streaming box.

Then he states "the choice is yours" - which it is, and there is little anyone can do about it.

He then caps it off with "good luck" - appealing to fear again ?

What an idiot,  a$$hole or hard up for work actor putting his face to this bs message.

See the enticement for you to commit to a commercial transaction:

Posted by AuCorp at 8:33 AM No comments: