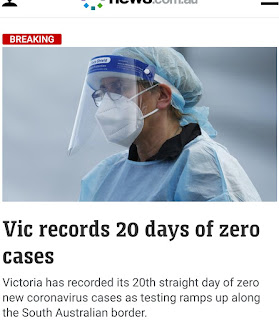 He (Daniel Michael Andrews) has done it (falsified reports) before, now he’s doing it again.

Ever thought that the so called ‘cases’ are miraculously zero, given the allegation that the mainstream media was reporting outbreaks in the low class suburbs of Melbourne just not that long ago?

We've obtained information from a reliable government source that stated last week that the Dan Andrews government has been falsifying the COVID test results, for the output to be zero under all circumstances for one very specific reason.

That reason is not for the benefit of the people, so that they can be together to be together, instead of staying apart.

That reason is not for the mental health of those who suffered being isolated, or who withdrew from society or have obtained mental health issues, as a result of Dan Andrews’ ‘directions’, integrating back into society.

The only reason we have been given a figure of zero cases is for an action which we have given it the term an action in business/commerce/trade.

That action is just one word.

Now the real question is when it’s over, will we get a miraculous spike in so called ‘cases’ in 2021 just like South Australia did now?