Fines Victoria IT mess, government lies that you must pay the fine

Would you be surprised if you were told that in this case the (Victorian) government has lied to motorists or rather to those 'accused' of committing a criminal road offence?

The government INSISTS that the fines issued by the 'one-stop shop' Fines Victoria, which replaced Civic Compliance in 2017 still have to be paid.

First and foremost your person or the 'accused' has the right to challenge any (and every) fine issued, which in reality you should do so.

They (the fines) do NOT have to be 'paid' but rather challenged.

You should comprehend the law that fines your person, and challenge that so called 'Infringement Notice', issued by Victoria Police, who get their authority from the Victoria Police Act 2013, and NOT 'Fines Victoria'.

Please Note: The illustration of the 'Infringement Notice' by the ABC is incomplete, as it is issued by the corporation called Victoria Police, as seen in the above picture.

It seems that the PRIMARY concern is 'lost revenue' and NOT road safety ...

See further details by the Australian Broadcasting Corporation at:

Posted by AuCorp at 6:13 PM No comments:

Last week, news broke out that some Samsung Galaxy S10 users were experiencing an issue with the ultrasonic fingerprint which would allow their phones to be unlocked from non-registered fingerprints. Later on it became apparent that the issue was also replicated on the Galaxy S10+ and Note10 series which brought more attention to the problem.

Samsung issued an official statement on the matter claiming that “certain silicone screen protectors” were causing the issue and that users should stop using these protectors and re-register their fingerprints without them. In a new development, a Note 10 user managed to trick the fingerprint scanner by placing a TPU cutout over it. This shows the vulnerability is not just related to fingerprints that were registered over a screen protector.

The video above shows the user’s Note10 is without a screen protector and we even see him re-register both his thumbs and index fingers for the purpose of the test. At the 1:22 mark, the user places the TPU cutout over the lower part of the screen which manages to trick the scanner to unlock the phone with a non-registered fingerprint.

The same process is performed multiple times with different fingers and each time the scanner gets bypassed. It’s also worth mentioning that the test was performed on the Exynos variant of the Note 10 as we are yet to see if the Snapdragon models are also experiencing the same flaw.

Samsung did issue a software update for the Exynos Note 10+ 5G recently which provides improvements to the fingerprint scanner and should also offer one for the rest of the Note10 and S10 lines soon.

Posted by AuCorp at 8:32 PM No comments: 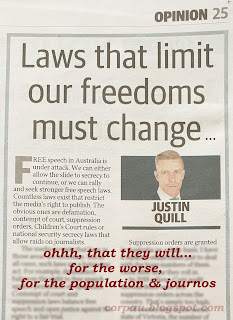 Many people do not realise that Australia, the country they live in is a colony, after all it is written so in the constitution.
(See Sect 8 of the Commonwealth of Australia Constitution Act at:
https://www.legislation.gov.uk/ukpga/Vict/63-64/12/contents/enacted)

With this in mind something else comes into play where the colonialists enforce a term we call 'Penal Colony Policies'.


Also many are of the erroneous belief that 'we' (the people) have freedom of speech or 'free speech' in Australia, which we do not.

Therefore 'police state' of Australia wants to rule in secrecy, and their corrupt and illegal actions to remain hidden from the tax slaves the MPs are supposed to allegedly serve.

The "nothing to hide, nothing to fear" saying applies to the serfs and not to those in government.

New law will be put into 'force' which will allow government to get away with more criminal activity without the fear of exposure or even prosecution.

The new level of corporatocracy/totalitarian rule/fascist state or however else on would like to describe these actions is comming to the people of Australia.

So what are they going to do about it?

As long as there is plenty of beer on tap, sport and reality tv to keep the distrations going.

Australia a nation of real losers.

Maybe they need to lose a lot more in order to wake up?

P.S.: (more) austerity is coming your way to 'straya.
Posted by AuCorp at 3:47 PM No comments: