The people in the executive running Australia's "people's courts" are corrupt to the core.

The Administrative Appeals Tribunal has been caught out deleting a matter.

How can the lay person expect a 'remedy' from a corrupt institution?

It seems the people in the administration are above any consequences, meaning above the 'law'.

Will any criminal charges apply? 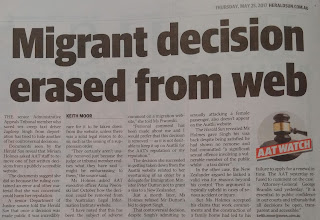 Posted by AuCorp at 2:21 PM No comments:

Microsoft extortion on the wave of the WannaCry ransom

So many people by now should have been aware that this global (computer) 'virus' called WannaCry or other variations of it, has effected many people allegedly across 150 countries.

For those who missed it, to be as concise as possible 'hackers' got access to your PC via a vulnerability in Microsoft's Windows operating system, which in turn, the hackers encrypted (locked up) the files on the PC, demanding $300 for the 'key'.

THAT information was fairly consistently reported by the mainstream media.

What was (deliberately?) not reported by the mainstream media is the Bill Gates' technology company Microsoft deliberately held back the fix UNTIL the virus started to spread to extort huge sums of cash from businesses.

You know you cannot trust Apple, Google or Microsoft with your private/personal information, but now Microsoft being involved in Electronic Espionage is literally a criminal action.

Zero action in the courts? Above the law?

Still trust the forced update to Windows 10, where you have little control over your computer?

... because he's a just a bit more than NQR for Hollywood, and besides that's already been done ...

So what's been happening in the good land of South Australia?

Apparently  "anti vaxxer" (which is HIS choice if he wants it to be, that is NOT the issue here) Frankie waltzes (or was it foxtrots)  into a Centrelink office STATING that he has been sent by the "Commonwealth of the South Australia".

This is what he stated publicly:

"Can everyone listen up please..
I've been sent by the real government...
of the Commonwealth of the South Australia...."

So, we tried to phone a minister from the "Commonwealth of the South Australia" 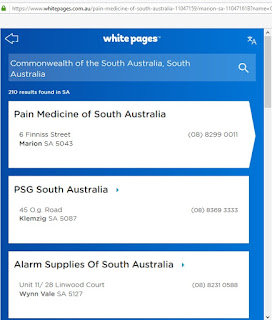 and Telstra's search was fruitless...

Since we know how dodgy the people in government are, we checked the ABN register, as they are always up for a quick buck... 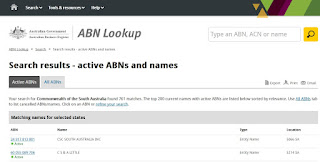 but were not very successful there either. Why?

Because the "Commonwealth of the South Australia" does NOT exist in REALITY.

This is what some viewers said in the comments section of the video:

skyejordon1 year ago
omg this man is dangerous and a crack head too!﻿

Heart Centred1 year ago
what has happened is he has allowed his fears from reading too much what is in print - he's allowed himself to personalise things other people say and has taken over his life to the detriment of everything else. What will happen is he'll get sick and blame the world. His children will grow up fearful and mistrusting because he is essentially saying I HAVE NO POWER.﻿

Would you believe a man who has publicly lied to you?

See the full video for yourself:


If ANYONE has a contact name of a man/woman/person from the "Commonwealth of the South Australia" please put the details in the comments below.

Posted by AuCorp at 7:18 PM No comments:

Australia's court system is literally littered with white collar criminals, where that does not mean the 'defendants'.

•    Judges causing harm to the good people of Tasmania for approx 30 years, where the people did not get a remedy.

•    The judiciary in the High Court of Australia, perverting the course of justice, where the criminals are still allowed to 'trade' in office, and where the people again do not get a remedy.

•    No warrants existing where the administration tell you that you must pay otherwise the sheriff will steal your possessions.

•    Every single judge / magistrate who sits in office sits outside of their grant of power,

and that's just rattling off a few obvious ones without delving too deep in 'law' or what it's worth.

So what are the white collar criminals planning?

Well, if you're a court jester, you'd know that security is pretty tight before the herd population are allowed to enter "their" own courts.

So much so that some people get stripped (in another room of course) before they are allowed to proceed to their own matter.

What event will trigger the next phase of court security on this penal colony?

We know of one action that they will be implementing very soon. 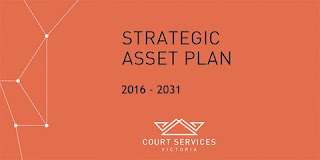 I congratulate the Courts Council and Court Services Victoria on the launch of this important and comprehensive Strategic Asset Plan for CSV.

The Plan provides a framework for the development of Victoria's courts and tribunals for the next 15 years, to ensure the safe, secure and sustainable delivery of court and tribunal assets, through expert asset management.

The Plan follows an extensive review of CSV's current assets and a detailed analysis of future needs, based on demand and population growth projections.

There are 75 court buildings in Victoria across 66 locations. They provide an outstanding service but improvements are needed.

That's why the Government committed $58.1 million to urgent upgrades to safety and security at courts across Victoria in the 2015-16 Budget.

For Melbourne's CBD, service demand for our courts is projected to increase by an estimated 27 per cent by 2031.

Metropolitan Melbourne currently consists of 4.5 million people and over the next 15 years is estimated to grow at a rate of 1.7 per cent per annum.

Areas such as the south-east and south-west corridors have already seen unprecedented population growth.

Metropolitan Melbourne currently accounts for approximately 42 per cent of service demand in Victoria and the increase in population will continue to drive an increase in demand.

In response, the Plan recommends the following priorities for the courts:
While the Plan acknowledges the importance of the Melbourne CBD and the needs of individual court buildings, it goes beyond the CBD to focus on a State-wide strategy that is forward thinking and innovative.

It looks at the continued growth of the Melbourne metropolitan area and the challenges that face our State's regional courthouses.

The Government's Access to Justice Review, released on 4 October 2016, highlighted that access to justice goes beyond the courtroom to user-focused service provision, such as mobile and flexible services available outside of conventional business hours. This Plan is an example of the justice system adapting to meet evolving community expectations.

The Plan will help ensure courts and tribunals in Victoria will meet the changing and growing demands of our community.

The Government will give it close consideration in future decisions about investment in our justice system, and continue to work with the Courts Council, CSV and individual jurisdictions to ensure the delivery of cost-effective and high quality justice services for all Victorians.

The corruption of the people in 'government' and in the Australian courts is astounding with reference to Australia's "Constitutional Crisis".

Even though this has been a topic of great discussion and "noise" by researchers, the corporate media has managed to keep a lid on it for quite some time.

The horse has bolted once Rodney Culleton's exposing documents have hit the parliament floor, where a 'natural' reaction of the "faceless people", is an action of hostile retaliation, which no doubt Rodney Culleton has seen.

Chief Justice Sir Harry Gibbs has commented on this where this was documented in the blog post: http://corpau.blogspot.com.au/2014/03/sir-harry-gibbs-chief-justice-of-high.html

The document referred to in the link, although not visible, is available for download at:
https://drive.google.com/open?id=0B21_coIgIYu2MGd3bzZUcTNvS0k