It is surprising that in today's society with all the information at one's fingertips, literally i.e. smartphones, where humans should realise that products sold from McDonald's stores that masquerade as food cause all sorts of health problems.

Super Size Me was a documentary made in 2004 by Morgan Spurlock on the real health dangers of consuming products from McDonald's stores.

Let's take a look at what the company advertises as one of their burgers, as seen in photo below: 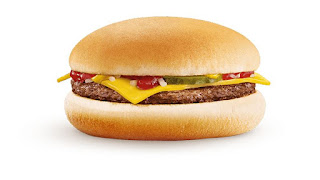 Here is a reality the loyal humans are given, as documented by a social media user: 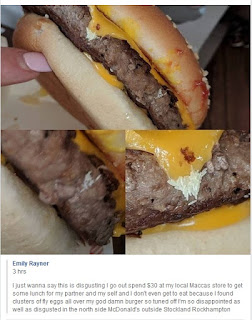 We do not recommend the purchase or consumption of McDonald's items.

Posted by AuCorp at 6:44 PM No comments: 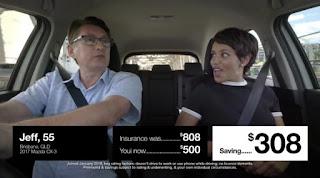 One of the general rules we like to apply to television is that whatever is advertised on it, you as a customer can purchase that product or something similar, being of better value or quality elsewhere.

Australian free to air TV was bombarded with advertisements from the insurance company Youi, where if you know anything about the tv advertising industry, you'd know it's got to be dodgy.

Where here is the proof as a result of the banking royal commission, as documented by The Age publication: 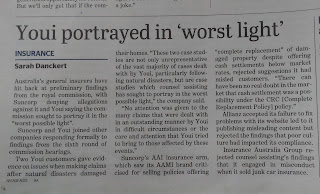 One general rule could be applied to products advertised on television:

You know like McDonald's, KFC, Coca-Cola et al, the products they advertise masquerading as 'food'.

As people should realise, Australia is a constitutional monarchy, where inherent law (e.g. Bill of Rights 1688) from the motherland is still current today.

Aussie television buffoons will know that shows aired will reference American people's rights with regards to the (US) constitution and amendments, but all is quiet on the western front with regards to the Australian people being taught our founding legal document commonly referred to as the 'Australian Constitution' or rather the Commonwealth of Australia Constitution Act 1900 (UK), which every law and action by those in government must be adhered to, no exceptions.

A recent article from a publication in the motherland, describes an Australian judge from the County Court of Victoria, Sarah Dawes, as maybe some sort of hero(?), or straight down the line "no-nonsense" approach to crime, or so you are led to believe.

What the public are not told about is that Sarah Dawes was a magistrate in the Melbourne suburb of Heidelberg, in 2011, where she subverted any constitutional argument brought before her, a legal requirement (commonly referred to as a 'Section 78B') of a magistrate if the accused should choose to do so.

How can you really trust a judge who threw away your constitutional rights, the founding law of the Commonwealth of Australia, in the lower court?

Realistically the good judge should be a resident of the same premises the persons are being sentenced to.

Supporters of Abdirizak Mohamed Scek, 25, and Said Abdirahman, 28, swore and disrupted the court when newly-appointed County Court of Victoria Judge Sarah Dawes sent them both to jail.

The men, who are Somalian asylum seekers, pleaded guilty to just a single charge each of intentionally causing serious injury. 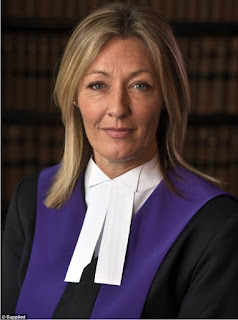 The sentence came just hours before a gang of African thugs terrorised commuters on a train in Lynbrook, in Melbourne's south-east.

Judge Dawes'  sentence comes amid community outcry for tougher sentences, with thugs frequently walking from the court with little more than a slap on the wrist.

The savage attack on March 17 last year at a North Melbourne park left Nathan Brett with a fractured skull, bleeding on the brain and his finger hanging by a thread.

Mr Brett had attended a birthday party at a mate's house earlier that night in which the thugs also attended.

The court heard the victim knew Abdirahman from the neighborhood, but had no idea who Scek was.

The offenders - both refugees from Somalia - got booted from the party after Scek lost his pants in the toilets with a young woman.

A scuffle erupted outside, the police were called and the party ended.

The men left, but they didn't go far.

When Mr Brett joined the party host for a late night snack at a nearby convenience shop, they found a friend suffering a wound from a machete.

They called him an ambulance and the friends set about home.

But a decision to take a short cut across an oval on Boundary Road almost cost Mr Brett his life.

Judge Dawes said the men were confronted by a group of African males armed with machetes and pointing them in the air.

One of the African men said to Mr Brett: `Why did you send him?'. Mr Brett replied that he did not understand what they were talking about.

Abdirahman struck Mr Brett in the head with a machete, with Scek following up with a blow to his hand as Mr Brett tried to defend himself.

The wounded man ran for his life, but the thugs chased him and hacked him as he fled.

Mr Brett was saved when someone opened the door of his mate's home and let him inside.

He escaped jail on that occasion and was placed on a community-based order for a year.

He blamed drugs and alcohol for his latest offending.

'I am troubled that there has been no explanation provided,' she said.

Like his mate, Scek claimed he was 'wasted' on the night.

Judge Dawes said she hoped the sentence would come as a warning to like-minded offenders.

'It is important to deter other young men from settling their differences with the use of violence and machetes,' she said.

'A significant term of imprisonment is the only appropriate disposition in this case.'

Each of the men have already spent more than 200 days in jail.