Australia's NBN the joke of the IT world 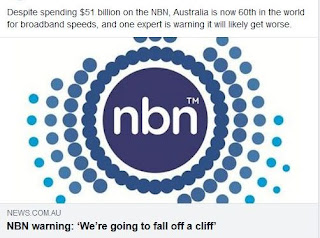 The Australian Government's national internet project under the NBN (National Broadband Network) label is a (deliberate) failure at the expense of the hard working Australian tax payers.

As each year goes by Australia's internet speed rating pummels, no thatnks to the NBN.

What's even worse (for the 'consumers') is that when it's finally rolled out across the entire country, it's going to be sub par and obselete, where the corporation aggregate call the 'Austalian Government' will sell off the tax payer's asset (or in this case a liability).

Hip Hip hooray for the imbeciles in charge of the colony we call Australia.

Just as long as plenty of people get 'money for mates' jobs in the associated projects while ripping off the Australian 'tax slaves' in the mean time.