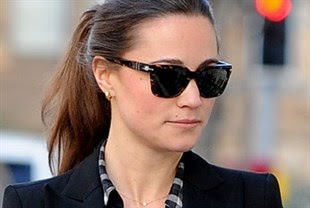 A friend of Pippa Middleton pointed a handgun at paparazzi as they snapped the pair sitting in a convertible in Paris.

A series of photos published in British tabloid The Sun show the unidentified man brandishing the weapon in the driver's seat of the Audi.

As he points the gun at one particular photographer, Middleton, 27, sits in the passenger seat with a smile on her face.

A source told The Sun that the gun was real rather than a replica, putting both Middleton and her friend at risk of serious criminal charges.

"If the evidence points to her involvement, she will be prosecuted," a source was quoted as saying.

"Anybody involved in the illegal use of a handgun in public is liable to arrest and interrogation."

If French police decide to press charges, her friend could face seven years in jail for brandishing a gun in a public place.

Even if the gun is proved to be fake, the man could face up to two years behind bars.

Lets see how these people (Middleton) will be above the law.