What many Victorians do not comprehend is that the person in office as the Sheriff of Victoria, Brendan Facey is not in office lawfully.

Also in many instances the corporation conglomerate (read government) 'hide' the name of your assailant.

As many people would know your person's name is the key, therefore sometimes (read quite often) the authorities do not give the full name of the person you are up against.

One example of this policy is taken from the public notice listing of the daily newspaper as shown in the illustration below.

The heading reads ADVERTISEMENT OF AUCTION BY THE SHERIFF.

The public can read that Erdal Vural's dwelling will be auctioned, but there is no mention of the name of the Sheriff.

At the end of the notice the word 'Sheriff' appears with no reference to any person's name.

The only other communication that one may receive from the 'Sheriff' of Victoria with the person's name is a computer generated letter with a digitised scan of a signature that may be Brendan Facey's signature, but not in wet ink, alleging that you have an outstanding warrant.

One would like to think that one's warrants are all 'outstanding'.

Another example of you not knowing your assailant's name can be taken from the law list of the Magistrates' Court on any day.

In the illustration below a sample is taken from Friday the 11th day of March 2016, at the Magistrates' Court in Melbourne under the criminal listing. 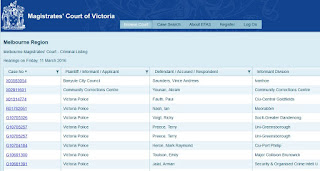 Notice that the defendant's (full) name is mentioned, but not the person who they are up against.

Another action by the authorities of a penal colony system.

Please note that to date there is no lawful warrant (in Victoria) that exists against a person that is generated as a result of the 'Infringements Court'.

Posted by AuCorp at 1:39 AM No comments:

The mother that alleges she was raped by a bus driver and conductor.

A two-week old boy reportedly died after being thrown from his mother’s lap while she was being raped on a bus.

The alleged offenders: the bus driver and conductor.

The gruesome incident happened in the Sheeshgarh village in India on Monday night while the woman was returning home from a family function at a nearby village, The Times of India reports.
The woman’s three-year-old daughter was also on board the bus and hid behind a seat as she watched the violent attack unfold.

Police said the men forced alcohol down the 28-year-old mother’s throat before raping her, leaving her so intoxicated she couldn’t remember the violent attack.

When the woman resisted, the men flung the baby boy and he died instantly.

Police said the woman’s daughter is the only witness they have.

“The incident took place when fellow passengers had left the bus,” Superintendent of Police (rural areas) Yamuna Prasad was quoted as saying in The Times of India.

When they finished raping her, the men dragged the woman off the bus unconscious and placed her and her dead baby’s body on the road next to the bus stop, police said.

Mourners carry the body of an Indian girl who was raped and set on fire during her funeral in New Delhi this week.Source:AFP

It was at this point that the girl says she ran off the bus and hid until the men had left.

The three were discovered in the early hours of Tuesday morning by the woman’s husband and other locals who had come out to search for them.

The woman was taken to hospital where she is receiving medical attention.

Both men have been arrested and charged with gang rape and culpable homicide.

The attack is the latest in several recently reported cases of rape against women or children in India.
Earlier this week a 15-year-old girl died after being raped and set on fire in New Delhi.

Note to 'authorities': Why not bring this trash into Australia as 'refugees' as it would be their 'human right' to live in a better country.

Even better, why not bring in child (James Bulger) killer Jon Venables to Australia, give him a false name and let him out into the community....

Oops they (the 'authorities') already did....

Here's one for the record books.

So the corporate media has stated that fraudster Brian John Kelly has strong connections to "Criminal Motorcycle Gangs".

So that means the the 'gang' the he has connections to has been "actually" charged with criminal activity.

The whole 'gang' must be charged with criminal activity.

If the 'gang' is an association, a business entity, or a corporation then that entity has to be charged as a criminal organisation as a whole.

Can the corporate media produce such documentation that the organisation as a whole has been charged 'criminally'?

If not, then they have stated false or deliberately misleading information.

Is this part of a deliberate political agenda for fear mongering?

Is this part of a deliberate ploy to discredit the 'gang' that may have people that commit criminal activity?

Read the original article at: