On Thursday morning PNG police, the paramilitary Mobile Squad and immigration officers entered the centre to force out the remaining hundreds of refugees who for more than three weeks have camped in deteriorating conditions.

Refugees reported that about 40 men had been forced on to buses, presumably heading to the transit accommodation. An ABC journalist reported seeing several buses carrying refugees leave the centre.

The men have refused to leave the facility – which formally closed at the end of last month – because of their safety fears in the town of Lorengau.

It was not clear on Thursday afternoon where Boochani had been taken, or whether he had been charged. Manus Island police officials could not be reached.

Boochani has been one of the most prominent of the group, reporting for the Guardian and a number of other publications around the world on the conditions inside the centre.

On Thursday afternoon several refugees confirmed Boochani had been taken away from the camp by members of the Mobile Squad. Pictures of the event showed him being led away, flanked by officers.

Boochani had been reporting from a hiding place in the toilets while officers confiscated phones and destroyed the belongings of refugees.

However, according to witnesses, officers specifically searched for him and others reporting events to the outside world. 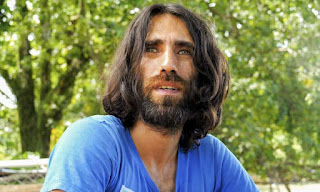 Iranian-Kurdish refugee and journalist Behrouz Boochani has been arrested on Manus Island. He was seen taken away from the detention centre by the paramilitary Mobile Squad.

Amnesty International said it wasn’t clear why Boochani had been arrested but it appeared to be “a deliberate attempt to isolate human rights activists from the wider group”.


“The arrest of Behrouz Boochani as a so-called ringleader of the peaceful protest on Manus Island is deeply misguided,” said Kate Schuetze, Amnesty International’s Pacific researcher.

“It violates his rights and sends a terrible signal about PNG’s intentions with regard to the remaining 400-plus men. He must be immediately and unconditionally released from police custody.”

Australia’s Media Entertainment and Arts Alliance union said if Boochani had been targeted because of his reporting then it was “an egregious attack on press freedom”.

“His reporting in the finest traditions of journalism has been critical when the Australian and PNG governments have done everything they can to prevent media from having access to the asylum seekers on Manus Island,” said the MEAA chief executive, Paul Murphy.

“We call on the Australian and PNG governments to release him from custody, assure his safety, and not to hinder him from continuing to perform his role as a journalist.”

This month Boochani was awarded an Amnesty International Australia media award for his body of journalistic work reporting from Manus.

The award’s judges said his work “delivered under very difficult circumstances, is powerful,
courageous and extraordinary. Its currency, its emotion, its credibility all combine to make it really special”.

Boochani, an ethnic Kurd from Ilam city in the west of Iran, bordering Iraq, was a freelance journalist in his homeland, and began his career writing for the student newspaper at Tarbiat Modares University in Tehran where he studied geopolitics.

He wrote for several newspapers in Iran, including the Kurdish language magazine Werya.

Boochani spent several years under surveillance because of Werya’s promotion of Kurdish language, culture and politics. His membership of the Kurdish Democratic party, outlawed in Iran, and the National Union of Kurdish Students, brought him even closer attention.

In 2011, Boochani was arrested and interrogated by Iran’s Sepah – the country’s paramilitary intelligence agency. In 2013, Werya’s offices were raided and his colleagues arrested. Escaping arrest, Boochani fled the country. 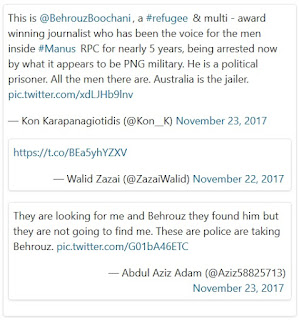