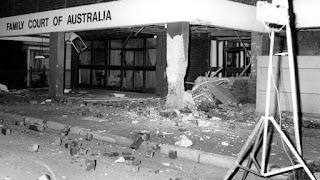 In the colony we call Australia, at the helm is ‘Scotty from marketing’ or as others put it ‘Scumo’ running the place in a totalitarian manner, where the legal system is a laughing stock as seen by the motherland since at least 1984, which as some know would be the beginnings of two Acts they did not get right (LOL).

One particular focus of interest are the actions of the judiciary.

From ‘low level’ judicial registrars to federal court [so called] judges, the judiciary has gone literally feral on the serfs acting with impunity largely unnoticed by those harmed.

Do you recall the mainstream media notifying you that magistrates in Tasmania have not been sworn in correctly over the past 30 years?

How many of those harmed have sought a ‘remedy’?

How many of those legal businesses that apparently ‘care’ about you, have begun a class action lawsuit?

You do realise that not sworn means no lawful action can be taken, right?

One of the most destructive courts in the country feeding off misery and bleeding persons dry of their funds in order to support itself and the lawyers supporting it is the family court or as it should be advertised the anti-family court.

Paying hundreds of dollars per hour into the system, to see your very own flesh and blood son/daughter is not bleeding you dry?

How many people/families have been destroyed ‘illegally’ by the family court?

How many so called ‘judges’ have acted criminally, unnoticed by the harmed and definitely not pulled up by their lawyer, remembering that a lawyer being an officer of the court has the best interests of the court first and foremost then maybe their ‘client’.

The Lawyer X / Nicola Gobbo scandal was never intended to see the light of day in the public news media, shows the general population just one example of the corruption in the judicial system.

Will this year be another year the harmed let their oppressors get away with it?

Did they teach you this in law school?:

The feral behaviour of those in government led to the enactment of the Colonial Laws Validity Act in 1865.
Posted by AuCorp at 7:56 PM

Legal maxim-fraud vitiates everything ! Our ancestors from Britain whom established the colony LIED to their Queen and UK parliament when they declared the land terra nullius, thereby committing treasonous fraud. Therefore ALL legislation ,Acts ,statutes blah blah are NULL& VOID . NO parliament nor it's departments have any authority whatsoever and they are just perpetuating the fraud currently by imposing implied contracts upon the masses whom don't rebutt the false premise in the first instance.