CLINTON Bassett's mother and sisters are furious that the men involved in his death will not go to jail. 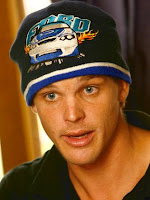 Kayd Craig Thorp, 26, (pictures) and Mitchell Garside, 21, were sentenced to 15 months' jail wholly suspended for two years in the County Court last week.
Standing trial on a charge of intentionally causing serious injury, they pleaded guilty to the lesser charge of recklessly causing serious injury and perjury.
The court heard Mr Bassett, 40, was armed with a piece of wood when he confronted Thorp at his Point Lonsdale home about 4pm on February 3, 2010 over incidents of bullying between their children.
Judge Sue Pullen said the prosecution had accepted the injuries Thorp inflicted on Mr Bassett with a softball bat in his garage, including hitting him in the head, "constituted lawful self-defence".

Mr Bassett was taken to The Alfred hospital, where parts of his skull were removed as his brain swelled. His life support was turned off on February 5.
His mother, Lynda Lakin, and sister Georgina Knox said they had been waiting for justice to be done before holding a funeral, but they were still waiting.
Ms Knox said she would never trust the law again.
"Why have a maximum of 15 years if you're only going to impose 15 months?" she said. "I lost my brother and was basically told it didn't matter, but he did matter to a lot of people.
"He was a brother, a father, a son. He was somebody and all that got lost in that trial."
She said of the case: "It was all about (Thorp), everything had to be done to protect him from prejudice ... that's not who Clinton was; it was one moment in his life, and it was the last moment."


The politics is very simple, that being to let out killers, rapists and child molesters out into the community to re-offend, to keep the community at bay.

This is a typical governance tactic, to keep the masses submissive.

The criminal is protected under Australian law, and not the victim.

Posted by AuCorp at 1:15 AM No comments:

HALF of all violent assaults reported are wiped from official crime figures, a shock investigation has found.


More than 25,000 assaults reported to Triple 0 in just one year never made it to Victoria Police statistics.
They were deleted despite repeated official demands for the data to be used so Victorians know the true level of crime in our community.
The Australian Bureau of Statistics took the unprecedented step of refusing to publish Victorian assault figures in last month's annual crime victims report.
The controversy comes a year after former police chief Simon Overland was forced out of his job for selectively releasing crime figures.

Another former chief commissioner, Kel Glare, said the situation was a disgrace.
He said accurate data had serious implications for resourcing decisions and it was time the Baillieu Government delivered on its promise to establish an independent agency.
The gap between assaults reported to 000 and those recorded by police grew by 25 per cent in the year after Ombudsman George Brouwer called for police to use 000 data to accurately record crime levels.

The latest 000 data obtained by the Herald Sun under FoI shows more than 25,000 reported assaults went unrecorded by police in 2010 in breach of the force's own operational guidelines.

Crime Victims' Support Association president Noel McNamara said Victorians could have no confidence in the allocation of police resources while the true level of violent crime was hidden.
"It's disgraceful," he said.
A spokeswoman for Police Minister Peter Ryan said options were being analysed.
"It is important to get this decision right in order to provide the community with the most accurate crime statistics," she said.
Police were sent to 52,400 assaults in Melbourne and Geelong by 000 dispatchers in 2010. Just 27,000 assaults were recorded in police data.
A police spokeswoman said only crimes "validated" by investigation were recorded and if no one was present to provide details when police arrived it would not be included.

More fraud and corruption from the hands of  governance with respect to informing the masses as to the state of crime.

The government is responsible for falsifying reports as to the actual number of criminal cases, in order to portray a false picture, deliberately misleading the masses and leading them into a false sense of security.
Posted by AuCorp at 12:47 AM No comments: