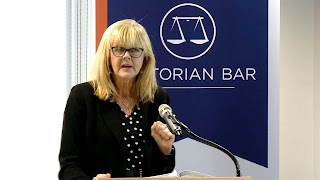 Victorian County Court judge Elizabeth Gaynor (pictured above) 'supported' the actions of a criminal involved in Melbourne's notorious Apex gang, where he was spared a gaol sentence and allowed a ticket out of this country.

Judges are fully aware of community standards / expectations, where their sentences reflect what the community expect from this beast called 'Common Law'.

Akon Mawien, a vile piece of human excrement imported by the Australian Government from Sudan decided to commit criminal activities against the good people of Australia, where he was linked to jewellery store heists worth approx. $200,000 while on the drug ice.

How can a judge be called your 'honour' if the judge deliberately erodes or goes against the community standards?

In Australia, if you do not pay a fine, which has hurt no 'man', you can end up in gaol for longer than someone who has committed murder / manslaughter.

See article from 14 Dec 2017 by dailymanil.co.uk of the headline:

Apex gang-linked thug, 20, spared jail despite terrifying series of ice-fuelled jewellery heists told he can go on HOLIDAY to Sudan while on bail

A young man linked to the notorious Melbourne Apex gang has been spared jail and allowed to travel overseas on a lavish holiday.

Akon Mawien was high on ice and armed with a hammer when he helped steal about $200,000 worth of goods from multiple jewellery stores.

But the 20-year-old has won the freedom to travel to Sudan while on bail, the Herald Sun reported. 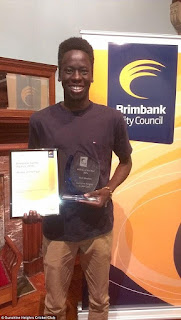 Akon Mawien was high on ice and armed with a hammer when he helped steal about $200,000 worth of goods from multiple jewellery stores

Police said his victims are furious they are repairing their businesses while he will be living it up overseas.
County Court Judge Elizabeth Gaynor said Mr Mawien's recent behaviour had been 'impeccable'.

Before the jewellery heist Mr Mawien has been an upcoming cricketer for Sunshine Heights.
He smoked ice for the second time in July 2016 before he and two other teenagers robbed a number of jewellery stores armed with hammers.

The heist was allegedly organised by long-time Apex gang member Mahmoud Taha, who promised them women and a hotel room.

Judge Gaynor said she was worried the victims would think the court was allowing the offender to go an 'exotic holiday'.

But she said his recent good behaviour needed to be considered.

'This is a matter of honour… people are putting a lot of trust in you,' Judge Gaynor said.

How did these snakes get into our justice system and for how long has this perversion of law been allowed to go on?

deluded SJW who should not be sitting on such cases IMO

It all started in 1975 when that little slimeball Al Grassby (Whitlam's immigration minister) decided to implement 'multiculturalism' in Australia without even asking us yobbo's, the people. The policy heavily favoured 'non-white' people such that we ignorant aussies could bathe, even marinade in the exotic cultures of Africa, the Middle East. Asia and wherever else these exotic, culturally gift-giving types resided.
It's why we can't walk through Lakemba with our wife and kids without being stared-down, insulted and even assaulted these days (see Lauren Southern's recent video on youtube on the matter). Perhaps get the missus to wear a fake beard, a felaffel stained sheet and a 'liberate Palestine' checkered scarf to fit in among the locals there.

Thanks Al, thanks Gough and Bob Hawke and all the other traitors that followed including the latest 'socially conscious' judge. I hope you all get culturally enriched with all the tenderness others have endured just prior to a long hospital stay before you 'kick ye olde bucket'just to make absolutely sure you 'got all cultured too!

she is a danger to Australia.

Extreme left wing "Judges" have no right to be employed in our courts of Law..This Judge has a lot to answer for..Investigate her

impeccable should be spelt with CAPITAL F&*O)^G letters should it not?