Cops and Robbers - A system designed to protect them 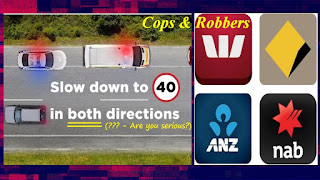 When the term 'cops and robbers' is used one would have the impression popularised by the US movie industry of the 'good guys' (apparently law enforcement)  versus the 'bad guys' , i.e. civilians gone bad, which is fine and dandy for the northern hemisphere.

You see in the southern hemisphere everything is downside up, and magnified when you're living in a real life colony, i.e. Australia.

The cops, i.e. humans part of the establishment and the robbers, in this case the hyenas in financial institutions are both the bad guys.

In a nutshell, the establishment protecting the people in businesses committing criminal offences.

Let's just put aside the farce the royal commission into banking was where at the end of the day, the customer / shareholder will be screwed over (financially) for any so called payments the banks may have to make.

What's worse (for the serf population) is that as a result of the commission there was a 'recommendation' that only two banks CBA and NAB face criminal charges with regards to over 13000 criminal breaches (only) in superannuation law, rather than actual charges being laid immediately as the police do against the serf population, when they have allegedly committed a criminal offence.

So let's looks at a couple of stories from today's mainstream media, where the first story focuses on the mentally retarded law of slowing down a driver's speed to 40km/h, pretty much immediately, even from a 110km/h stretch of highway.

Social media was alight with this story where a near miss occurred when a police officer was apparently nearly struck by a truck driver.

As a result of this there is a call (by police) to change the new road rule.

The intention (an important factor at law) of the new rule is to protect the lives of police officers and not the (serf) motorists.

In fact is seems that the law makers could not give a stuff about the safety of the general population, as this is reflected in their actions.

Please note that in Australia road offences are classified s criminal, where you are guilty until proven otherwise, which are called strict liability.

Hardly the fairy tail slogan of "innocent until proven guilty" touted somewhere else other than in Australia.

Australia's financial industry is one big criminal basket case which the so called 'authorities' allow to function and keep ripping off the good people, you know the 'mums and dads' investors.

Whereas conversely if a serf is accused (as opposed to being found guilty in a court) of withholding tax from the ATO, then the bank account is emptied, i.e. just another 'hint' that you live in a penal colony.

One of Australia's largest brokers, Halifax Investment Management, has screwed their clients out of almost $20m. 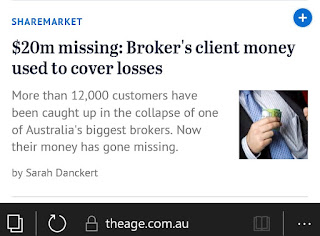 Will the screwed over investors recover 'their' cash?

The answers to those two questions are; most likely not.

Please note that one you give your cash to someone else, it's no longer in your possession, therefore no longer yours.
Posted by AuCorp at 8:15 AM No comments: 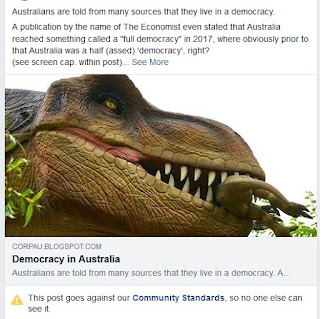 Fascism does not only occur in the real world but is also available online.

Corporations are restricting people's access to information, where Facebook has currently decided that the 'Corporate Australia' site is against Facebook's 'Community Standards'.

Facebook, being based in the U.S., is going against the 1st Amendment to the U.S. Constitution.

Posted by AuCorp at 3:54 PM No comments:

Face unlock not so secure 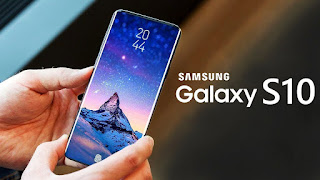 You (the consumer) may be told from government and corporate sources that biometric (facial fingerprint algorithms) technology is secure and the way to go.

You may be enticed into purchasing one of the corporation's newest hottest products, touting unbreakable security, but the real reason for the push to sell their wares is for profits from an inferior product.

Samsung's current new offering the Galaxy S10, has facial recognition that can be easily bypassed.