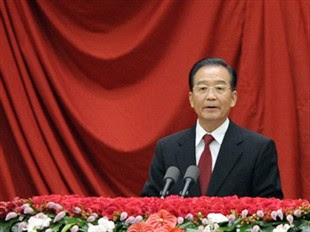 Freedom of speech is indispensable and the people's desire for democracy "irresistible", China's Premier Wen Jiabao said on Sunday as he brushed aside criticisms that Beijing is curbing such rights.

"I believe freedom of speech is indispensable for any country, a country in the course of development and a country that has become strong," Wen told CNN's Fareed Zakaria GPS program.

He trumpeted the fact that in a country of about 1.3 billion people, there are 400 million Internet users and 800 million people with mobile phones.

And Wen revealed that he often logs onto the Internet.

But in a rare interview with US media, Wen brushed aside widespread criticism from international observers and rights groups over efforts to censor the Internet, insisting China's communist leaders are adapting.

"I believe, I and all the Chinese people have such a conviction, that China will make continuous progress and the people's wishes for and needs for democracy and freedom are irresistible," Wen said.

"I hope that you will be able to gradually see the continuous progress of China."

China's communist leaders have ruled with a iron fist since revolutionary leader Mao Zedong proclaimed the founding of Communist China in 1949, but in past decades have gradually opened some spheres such as economic activity.

But they remain wary of loosening controls on freedom of expression and demonstrations, and there are many high-profile writers, lawyers and political activists currently imprisoned in China.

Wen repeated the government line that any such opening up of people's rights "must be conducted within the range allowed by the constitution and the laws".

"So that the country will have a normal order. And that is all the more necessary for such a large country as China, with 1.3 billion people," he stressed.

"I often say that we should not only let people have the freedom of speech. We, more importantly, must create conditions to let them criticise the work of the government," Wen said.

"And it is only when there is the supervision and critical oversight from the people that the government will be in a position to do an even better job."

Earlier this year there were months of tension between Internet search engine Google and Beijing over state censorship and cyberattacks that Google said had originated in China.

And a senior executive from the social networking site Facebook said last month that Asia was the fastest-growing region for new subscribers despite restrictions on access in China.

China restricted access to the site in July 2009 amid deadly ethnic unrest in the restive far-western region of Xinjiang, but users have found ways of breaching the censorship wall.

says one thing and does the completely opposite.

The aim of ANY government is to restrict the flow of information to the masses in order to lessen the chance of protest / civil unrest.

Every single government does this in one form or another, it's just that some government's are more blatant about this than others.