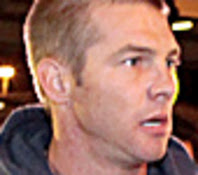 UPDATE: BEN Cousins, now back in Perth, could face jail over serious drug charges laid after an airport police swoop.


The troubled Brownlow medallist was arrested twice during a dramatic 18 hours in Western Australia.

Cousins, 33, was first intercepted by detectives minutes after stepping off a Skywest flight in Esperance at 7.15pm on Tuesday. Normal 0 false false false MicrosoftInternetExplorer4 /* Style Definitions */ table.MsoNormalTable{mso-style-name:"Table Normal";mso-tstyle-rowband-size:0;mso-tstyle-colband-size:0;mso-style-noshow:yes;mso-style-parent:"";mso-padding-alt:0cm 5.4pt 0cm 5.4pt;mso-para-margin:0cm;mso-para-margin-bottom:.0001pt;mso-pagination:widow-orphan;font-size:10.0pt;font-family:"Times New Roman";mso-ansi-language:#0400;mso-fareast-language:#0400;mso-bidi-language:#0400;}Detectives allegedly found Cousins carrying four grams of methylamphetamine. It is alleged the drugs were concealed internally. The former West Coast and Richmond star - who has battled drug addiction - had arrived for a stint at the Teen Challenge rehabilitation centre near town. Ben Cousins' timeline He was charged with possession of methylamphetamine with intent to sell or supply and bailed. Last night, Cousins arrived at Perth airport but he refused to speak with journalists. His flight touched down at 9.25pm but there was no one to greet him on arrival and a clearly agitated Cousins walked around the terminal for at least 10 minutes as he waited to be collected. "I've got nothing to say," Cousins said. Eventually, he was escorted by four police officers out to the carpark, where it is believed his partner Maylea Tinecheff picked him up. It is believed there may have been a heated confrontation between Cousins and a television journalist and cameraman, who were on the same flight, as they entered the terminal building from the tarmac. There were many cheers of support for Cousins from members of the public as he wandered through the airport. Earlier, in Esperance a witness said police approached Cousins near a baggage carousel and he appeared to know them. "They shook hands and he had a friendly smile. They all seemed like they were friends," the witness said. Police bailed Cousins later in the night but he was arrested again yesterday for allegedly breaching bail.

Cousins' second set of bail conditions includes that he report to police three times a week and live at his North Beach home in Perth.

Ben Cousins leaves Esperance airport for Perth after being charged with drug possession. Picture: Justin Benson-Cooper The maximum penalty in Western Australia for possessing more than 4g of methylamphetamine with intent to sell or supply is 25 years' jail and/or a $100,000 fine. Under 4g carries penalties of up to four years in jail and/or a $5000 fine. Cousins and his partner, Ms Tinecheff, had their first child six months ago. Cousins is scheduled to appear in Perth Magistrates' Court on Monday. Melbourne Lord mayor Robert Doyle described Cousins’ fall as the “wreck of a human being”. “Part of you gets really angry and part of you thinks ‘what a human tragedy’,” he said. “It’s terribly sad.” He went on to tell Neil Mitchell on 3AW this morning the Cousins story was “tragic and awful”. Cousins on collision course with self-destruction

Ben Cousins should have been incarcerated a long time ago.

He is a danger to the community and should be dealth with appropriately.

Drugs are illegal in Australia, but if Mr. Joe Average is caught he cannot 'buy' his way out of it like others can.

Lock away the criminal.