In Melbourne Victoria, there have recently been elections for members of local city councils. 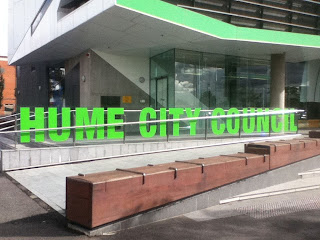 In the lead up to the elections, it has been discovered that there have been actions of fraud committed by councillors, in one city council area of Melbourne, particularly in relation to false votes.

In the northern suburbs area of Melbourne, in particular the suburbs that fall under the City of Hume, councillors are also involved in the same vote rigging fraud.

Voting results are being forged in order to push through the desired candidate, and as a result the local newspapers have not published the successful candidate to this date.

The local police work together with the government to cover up alcoholic members of the city council of Hume. A matter of fraud in vote rigging will hardly produce a suspect, let alone a conviction.

It is not only a concern that there is corruption in local government, but also that it is supported by the police.

No doubt the corporate media will show its skills with respect to this matter.
Posted by AuCorp at 10:23 PM