A SENIOR Federal Government minister's controversial claim that she could live on the $38-a-day dole has been edited out of an official transcript. 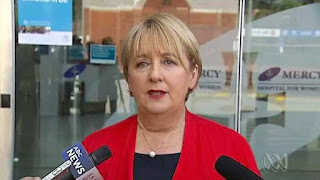 Families Minister Jenny Macklin, a Cabinet member earning $903 a day, pushed 84,000 single mums off the parenting payment and on to the dole yesterday as part of a budget cut designed to save $738 million over four years. The move will cost a single mum who works part-time up to $233 a week.

When asked: "Could you live off the dole?", Ms Macklin told reporters at the Mercy Hospital in Melbourne: "I could".
The National Welfare Rights Network immediately challenged the minister to prove it.
"We would welcome the minister taking up the challenge to understand first hand the extreme hardship facing parents raising children alone in difficult circumstances," National Welfare Rights vice president Kate Beaumont said.

Should Jenny Macklin make good on her claim that she could live on the dole? Have your say below

The minister's claim that she could survive on the dole is at odds with statements by her own ministerial colleagues and puts her under pressure to prove it.

The sensitivity of the remark became clear when a ministerial transcript issued just hours after the event described as "inaudible" the reporters question and the crucial first part of Ms Macklin's reply. Last night, her office claimed its recording had been affected by a revving car.

The last MP from a major party to put such a claim to the test was National Party MP Stephen Lusher who in 1984 had to concede after a week living on the dole that it couldn't be cut.

A spokeswoman for Ms Macklin yesterday accepted full responsibility for the transcript ommission.

"It was me trying to transcribe it quickly and get it out using a tape that was not good, I wish I had relistened to it," the spokeswoman said.

"Her comments are a matter of record and were recorded by a number of television stations,' she said.
The transcript issued by the minister's office lists one journalist's question as inaudible and the minister's remarks on the dole and two questions after the remark as inaudible. Video footage is crystal clear.

The dole stumble occurred as the minister was trying to publicise another government change that saw fathers of newborn babies eligible to receive up to $1200 in Dad and Partner Pay from January 1.

The cost of prescription medicine also rose on January 1 by 70 cents a script for general patients who will now have to pay $36.10 per script, up from $35.40.

Government lies or rather false/fraudulent information is somewhat the normality, which people are fed and 'accept'.

Macklin, another caught out minister with no repercussion whatsoever.

What is even more disturbing is the in official government transcripts, the comment has been edit out.

What else does the government blatantly lie to the illiterate masses?