Australian internet speeds have fallen again compared to the rest of the world, says a new survey.
Average Australian connection speeds fell 2.5 per cent in the third quarter of 2012 as the country sank to 40th in the world, according to Akamai Technologies' third quarter "State of the internet" report. 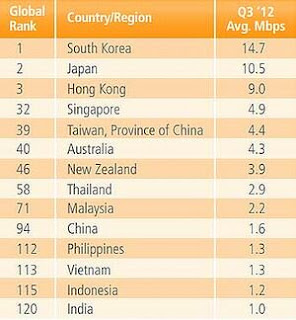 Australia dropped from 39th position globally in the second quarter of 2012, being beaten by five countries in the region. Australia came out on top of New Zealand, however, which ended up in 46th place.
It reflects a trend of global internet connection speeds slowing down around the world in late 2012, suggesting a temporary stall in broadband gains.

Despite the slowdown, year-on-year changes saw average connection speeds increase by 19 per cent in Australia compared to the same period in 2011.

The report also showed China remained the biggest source of computer attacks, and that Brazil and China appear to have the biggest surge in web use.

South Korea continued to have the highest average connection speed at 14.7 Mbps, followed by Japan with 10.7 Mbps) and Hong Kong (8.9 Mbps).

Globally, adoption of "high" broadband (speeds above 10 Mbps) grew 8.8 per cent in the third quarter and overall global broadband adoption grew 4.8 per cent, the report said.

High broadband connections in Australia saw a quarter-by-quarter decline of 13 per cent, but year-on-year changes saw connectivity increase by 14 per cent overall in Australia.

For the second quarter in a row, Brazil experienced the greatest year-over-year growth of 39 per cent within the group of top 10 countries. China showed the largest quarter-over-quarter increase of 5.7 per cent.

In analysing web attacks from 180 countries or regions, Akamai said China remained the single largest source, with 33 per cent of all attacks originating within its borders. The US accounted for 13 per cent, followed by Russia at 4.7 per cent.

For the mobile internet, Akamai said Apple's Mobile Safari accounted for 60.1 per cent of data requests on all networks, with Google's Android browsers responsible for 23.1 per cent.

The 'authorities' cannot even provide a decent speed for the masses, in an apparently 'first' world country such as Australia.

The telco monopoly is held in the clutches of Telstra, which profits are up every year, currently over the $3 billion mark, at the same time degrading user services.

Monopolies not only hurt the economy, but also stifle advances, which is of a huge benefit to the Australian corporatocracy.