No need to stop for police

Here is some information that is a follow up to a story that was published in the corporate media approximately 6 weeks ago.

The reality should read " Police have NO power to stop cars. ", but that is NOT conducive to accurate reporting.

Here is an article that ALL Australian motorists should be familiar with: 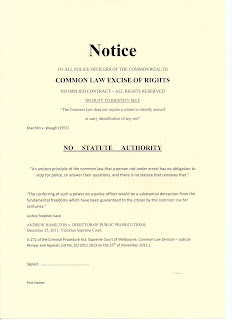 of the following text

TO ALL POLICE OFFICERS OF THE COMMONWEALTH

NO IMPLIED CONTRACT – ALL RIGHTS RESERVED

NO DUTY TO IDENTIFY SELF

“The Common Law does not require a citizen to identify oneself
or carry identification of any sort”
Koechlin v. Waugh (1957)

“An ancient principle of the common law that a person not under arrest has no obligation to stop for police, or answer their questions, and there is no statute that removes that.”

“The conferring of such a power on a police officer would be a substantial detraction from the fundamental freedoms which have been guaranteed to the citizen by the common law for centuries.”
Justice Stephen Kaye

Can i print a copy of this and hand to police when they stop me for no reason, no crime committed? And who signs at the bottom of it?

This isn't a legal document so if the police stops you it's required that you show them ID or be arrested.

Zad0r There is a difference between 'lawful' and 'legal'. 'Lawful' derives from the Constitution and Common Law. 'Legal' refers to statutes passed in Australia by an unlawful corporate parliament. It is unlawful for the police to randomly stop you and demand ID. Common Law and Constitutional Law sit above Statutory Law. Therefore their demands are illegal by virtue of them being unlawful.

I doubt that would stop arrogant pigs from arresting/ticketting/assaulting you.
Maybe could sue them later though?

After extensive research and with due deference to the real law in this country being the source, The Commonwealth of Australia Constitution as well as the Imperial Acts still in force and effect today I have some comments that I wish to clarify. It is my understanding that a 'signature' is provided by a juristic corporate fiction that we are all assigned with and shows as ALL CAPS in everything from drivers licences, bills, expiation notices etc. I now formally use a line as an 'autograph' which designates 'us' as a natural person of flesh and blood and not the corporate fiction name. I also use the sovereign 'we' which is generally confused as the 'royal we'. I have tried over the years to debunk my assertion but it works extremely well in correspondence especially with the add on of 'in rerum natura'. If anyone has any counter to this I would be extremely interested including any source material.