From the dodgy world of politics and banking and finance comes information on how the slave trade is alive and well on a global scale.

This information is provided from people within the industry, who naturally wish to remain anonymous, as the fear of  repercussions is real that may  follow through to their children. 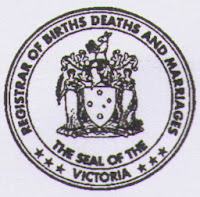 When a child is born in Australia, it is allegedly discarded from the vessel of its mother, and ownership is claimed by the corporate entity commonly known as the STATE OF (NEW SOUTH WALES or QUEENSLAND or VICTORIA, etc).

The 'seal' in the illustration is of a corporate entity and not a government / constitutional / common law seal.

Each 'State' of Australia is a separate business unit;

The 'Commonwealth of Australia' with the ABN 122 104 616 is registered (consisting of the above mentioned 'states' or businesses) with the United States of America, Securities and Exchange Commission, No. 00 080 5157, as a result open for trading on the global market place.

Each individual is given a CUSIP number which then translates to a bond value which is put on the stock exchange.

A prisoner also is traded on the stock market, under the name of the bonding warehouse (prison), where the surety (prisoner) is kept.

The 'persons' name is in CAPITALS, as the 'corporate' entity.

Under the U.N laws, of which Australia is a part of, slavery or the slave trade is illegal.

The term 'bond' is commonly used, but rarely understood by the general public as to its true meaning.

When a prisoner is release, the 'bond' matures, and earnings or profits have been realised.

A Prisoner can be released (irrespective of crime) if a financial transaction occurs to cover the cost of the earnings/profits for the duration of the incarceration.

There is an enormous demand for prisoners (for financial reasons), where in the United States of America one can be incarcerated for 'looking' incorrectly at a police officer.

In Australia you can be arrested and charged (become a criminal) for not paying a bill (or invoice) given by anyone.

The person in Australia is considered as self loading baggage in a commercial transaction of international trade and securities exchange when we travel from port to port.

If you do not have a ticket to ride from port to port, e.g. a train i.e. their vehicle ... the policy enforcers are waiting to take you away with an overwhelming force, to charge you as a criminal. (See photo) 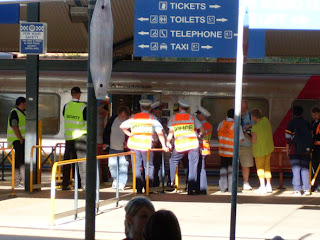 NB/ - Policy enforcer - is a 'person' who forces a (policy) corporate law upon you, the 'free man'.

Australia is the new 'Alcatraz' (prison isle) a fact that the 'sheeple' are blissfully unaware of, to which the corporate media shows a dead eerie silence on.