Letter to the sheriff - Brendan Facey

The Australian government together with various other corporations are involved in a nationwide fraud, where the 'customers' are everyday Australians.

The extent of the fraud can be mind boggling to the 'lay person', but a well known fact within the legal and political circles.

Key aspects of Australian society, from the tax office (ATO), council rates to parking / traffic / driving infringements have all been collected fraudulently by the various 'businesses', also including the operations of the 'Sheriff's Office'.

Many individuals are involved (read committed to) in the exposure of the corrupt dealings of the Australian government, and its related entities, which also includes the police force.

The incarceration of an individual, seizure of assets, or even the selling of one's home via fraud and deception, will not preclude others from acting for or on the behalf, exposing the corruption, and eventually dealing the same financial blows that have been used against the general populous.

The corrupt system deals with matters of this calibre through the magistrates and high court judges, by shutting down any opposition, in full contempt of the law.

When the 'defendant' brings up matters that the police have been caught out in fraud, the magistrate then answers back, that this is not the issue, therefore supporting the police corruption, 'erring' therefore acting 'unlawfully'.

The following attachment (pdf) is a letter to the so called Victorian Sheriff - Brendan Facey.

The above letter has also been forwarded to other key persons, as shown in the initial pages.

The so called authorities / courts are trying to engage you as your ESTATE NAME, which are TWO different entities.

The human being e.g. john citizen (john of the citizen family) is the administrator of the estate name JOHN CITIZEN.

The court fraudulently associates the human being with the ESTATE NAME.

Edit - 28/03/2014
Information has been obtained from another source that has researched some points made within the document above.
The information pertaining to the claim only is contained below:
Recently, Mikiverse Law shared a notice/article that was entitled "OPPT NOTICE TO BRENDAN FACEY, VICTORIAN SHERIFF", and, today, my friend & i started talking about a particular claim that we found inside the notice;

"The Road Safety Act 1986 – This Act has never been proclaimed, therefore it is INVALID."

If true, this is a powerful instrument, but, is it true?

i went & performed some research & found this; 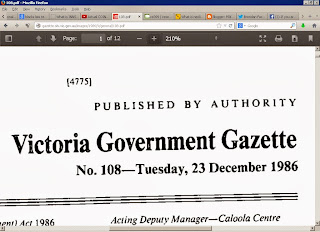 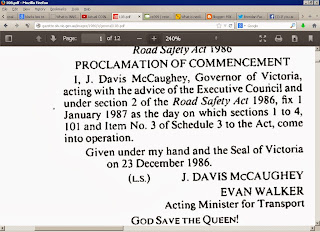 Turns out the Act has been proclaimed.

Therefore, the claim contained in the notice was wrong.


The article in its entirety can be read at: