A former Victoria Police officer charged with more than 50 offences allegedly robbed houses to feed a drug habit while on bail for perverting the course of justice. 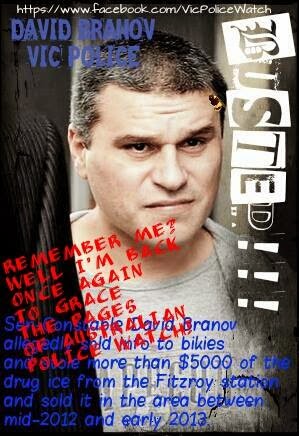 Former senior constable David James Branov, 42, of Epping, was arrested in April last year and charged with offences including perverting the course of justice, misconduct and drugs and weapons offences.

He was released on bail but was arrested again in April this year when he was a passenger in a stolen BMW containing stolen property which was pulled over by police.

Branov on Monday pleaded not guilty to all charges against him, including one count of possessing child pornography.

Informant Detective Sergeant Jarrod Weddle told the court Branov told him he had a drug addiction he overcame to join the police force, but started using again because of the "stress of the job".

"He told me he'd been a ice addict prior to joining the police force," Det Sgt Weddle said.

"I think he needs to commit offences to support his drug habit."

Branov is also alleged to have stolen drugs from the Fitzroy police station property office under the pretence of doing "spot tests".

"While the bag was open the drugs would be removed and substituted with another substance," Det Sgt Weddle said.

Branov is also accused of conspiring with Dean Murphy, 38, of Seddon, and Jamie McNally, 34, of Tarneit, to prevent a brief of evidence being used in court against McNally.

The detectives were told "the occupant was paying a police officer $600 a month in exchange for information", Det Sgt Weddle said.

Magistrate Jelena Popovic denied Branov bail and said she was severely concerned about items found in his possession including the weapons, lock-picking tools and identification papers.

"I have some concerns about the fact you were admitted to the police force," she said.

Branov will appear in the Victorian County Court on Tuesday.

Another corrupt cop, one of many, but only one of a few that has been caught.