Why a fine from the Infringements Court is NOT valid

In Victoria, Australia apparently there exists a so called court - the Infringements Court.

Your lawyer says: Well that's what the envelope says, so it MUST be true.....
(remembering that the lawyer works for 'them' not you, call it (the lawyer) a 'misinformation merchant')

The interwebs has many answers, and so do facebook 'how to get out of (whatever)' groups (maybe) full of:

For those who can fluently type "infringements court" in a popular search engine, they may be able to comprehend that it is (allegedly) a venue of the Magistrate's Court as shown in the illustration below: 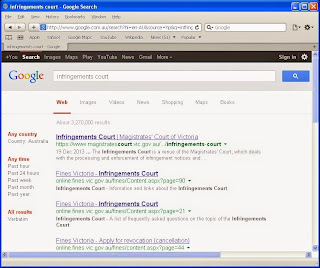 also with reference to a 'court' it is defined in Sect 75(2) of that same Act:

With reference to your 'infringement' which has been ruled 'ex-parte', putting aside the fact of 'double jeopardy' you cannot be 'done' twice...

From that so called Infringments Court you need the name of:

1). the Judge of the court who foresaw your matter (obviously ex-parte),
2). the Associate Judges of that court,
3). the names of the judicial registrars of that court.

In order to 'deal with it' you'd have to choose to go to a 'Magistrate's Court', which is really a place of trading/business/commerce.

N.B: In court, should you call yourself, the person's personal representative of the legal fiction name, or call yourself a 'freeman' it would be wise to also bring a tub of 'Vaseline', so that when they bend you over, it won't hurt as much!

Some may suggest that the ONLY law in Australia is a "do not harm another", or even that men of their stature do not go to court, as no doubt they have written on their "Infringements Court" letter:

and what STILL occurs is something call "due process", irrespective whether it's lawful or not.

* - The validity of law in Victoria is put aside.


The mainstream (Rupert Murdoch) media refuses to report on matters of such significance where Victorian motorists are being defrauded of hundreds millions of dollars annually by the 'authorities'.

The infringement's court or more or less a bulking centre for people who want a default judgement.

I did get a speeding NOTICE last month. All it was , was a picture of the rear of my wifes car at a controlled intersection with exceeding the speed limit by 8kph. and a request :) for payment of $168 and a supposid lose of 2 points. I sent the NOTICE back to department of transport registered with " There is NO contract" - " contract request denied " and gave just 2 points of why I have decided to deny them a 'contract'. I gave then 7 days to respond rebutting my arguements with "estoppal aquiesence applies ' A red thumb print on the bottom of the page over which I signed my usual signiture. 12 days later get a plain letter with a police traffic branch letter head [ yea right ]and some person apparenty in that branch saying my arguements are invalid. I chucked it where it belongs, in the garbage. Been 5 weeks, no more about it dispite the brain washed arguements from friends saying it will not succeed. No nay ayers have read the constitution.