Notice to all pretend sheriffs in Victoria 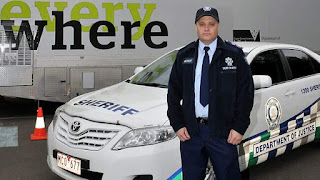 According to law, as stated in the current listing of Victorian Acts, under the SHERIFF ACT 2009 - SECTION 51 states:

A person must not impersonate the sheriff, the deputy sheriff, a sheriff's officer or an appropriately trained justice employee.

Note: The actual validity of law (read the Act) or any other Acts is put aside.

Are most Sheriff Officers of the single Sheriff Brendan Facey?

The law will not stop them fining you for riding a push bike in the city without a helmet.