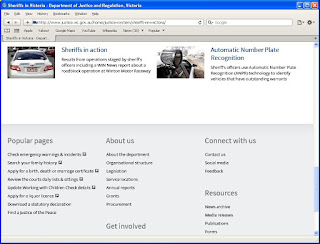 Has anyone asked the Attorney General why the Bills aren't being signed off by the Governor?

Most of the Court Acts are also "...The Parliament of Victoria enacts"

I getting so sick of the corruption.

Ok did a little bit of research and the Bills are 'proclaimed' by the Governor of Victoria.

Where confusion comes in is the wording "The Parliament of Victoria enacts" implying the complete process is done by the Parliament, which is not the said case.

In past the term "Royal Ascent" were mentioned.

The scrutiny to if a Bill is properly enacted is the proclamation documentation.

A trick the Parliament may use is that if a Bill mentions a date of proclamation, that date may bypass Royal Assent, or proclamation by the Governor. I would consider those Bills/Acts questionable.

Once again thanks for your comments Phillip.

"Has anyone asked the Attorney General why the Bills aren't being signed off by the Governor?"

We are aware of a fair few people who have written to the (alleged) 'crims' in office, but with little, incorrect or no response.

VERY difficult to get them to incriminate themselves, especially when they have to sign off on it.

The sheriff's crap is just one example how how fraudulently they operate.

You write a letter to the a$$clown, and you get a computer generated template response from another company with no 'person's' name or signature (for liability)whatsoever.

Actions of a fascist/totalitarian/penal colony regime.

So how do we get around all this? I'm in my 50's, I work full time and don't have time for a law degree (like it would do any good, based on what I've learned here). The so-called 'constitution" is invalid, so where do we start to defend ourselves against this corporate ripping off?